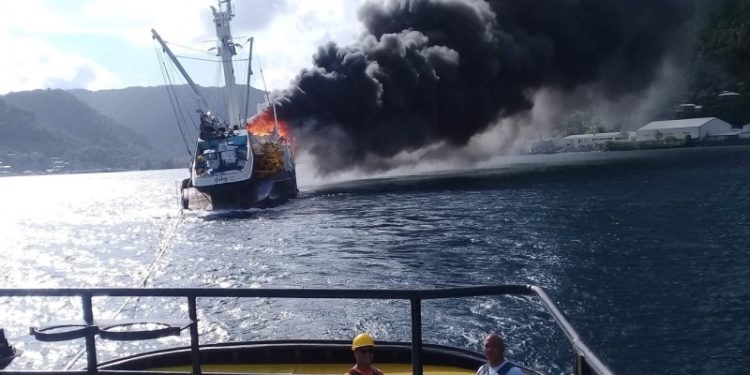 A tuna purse seiner that suffered a fire on board last week and was towed out to sea has sunk, and an investigation has been launched into the circumstances of the vessel’s loss and how the fire started.

The 70 metre (228 foot) Jeanette was at the quayside at Pago Pago in American Samoa to discharge when a fire broke out on board and firefighters were unable to control the blaze. The decision was taken to tow Jeanette clear of the quayside

None of the 22 crew were on board as the fire broke out, and there are no reported injuries.

Port Authority tug Isuela had Jeanette under tow when the purse seiner sank while still burning, 20 hours after the fire broke out and in a position 17 nautical miles south-west of the main island in approximately 3700 metres of water. The depth rules out any attempt at a salvage operation.

Personnel from the Marine Safety Detachment began interviews with the crew last week. Additional members from US Coast Guard Sector Honolulu arrived Thursday to assist. The team will also interview the firefighters, tug crew and others to determine the cause of the fire, sinking, and timeline of events.

Jeanette sank with a possible 400,000 litres of diesel and 1350 litres of petrol on board, plus 5 tonnes of ammonia and 1333 tonnes of fish in its holds, although the vessel had completed a trip and it thought unlikely to have large amounts of fuel on board.

‘The vessel poses minimal risk to residents and the environment,’ said Lt. Al Blaisdell, supervisor at the Marine Safety Detachment in American Samoa. ‘Any fuel remaining aboard if released will dissipate quickly. We are continuing with our investigation into the cause of the fire and the sinking.’

‘It’s unknown how much if any fuel remains aboard the Jeanette,’ said Al Blaisdell. ‘If there is any sheening we anticipate it is unrecoverable and will break up quickly and evaporate. The vessel is not a threat to navigation or fishing grounds. Our focus now is understanding how this happened and work to prevent future occurrences. This incident is a major marine casualty, and we are conducting our investigation jointly with the National Transportation Safety Board.’

The full investigation, to include the collection of data, analysis, summary report and approval of that report by Coast Guard Headquarters is expected to take several months at a minimum.