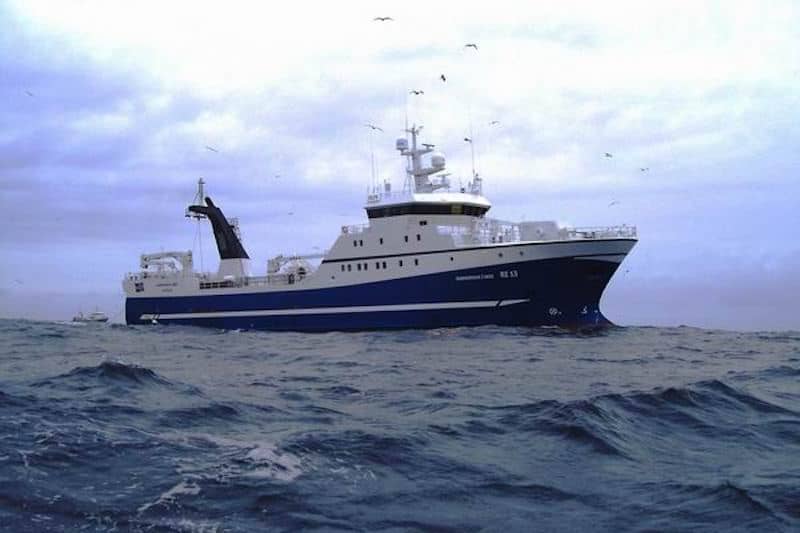 Factory trawler Guðmundur í Nesi RE-13 has been advertised for sale and its crew of 36 given notice as the latest round of fleet reduction by fishing company Útgerðarfélag Reykjavíkur hf (ÚR), previously known as Brim, takes place. The company is expected to be left with a single vessel in operation by the beginning of next year.

According to a statement from the company, Útgerðarfélag Reykjavíkur regrets having to take this step, as the trawler has fished well for the company over the last fifteen years.

Útgerðarfélag Reykjavíkur states that the reason for this drastic shake-up in its activities is partly the unfavourable conditions imposed by the authorities in Iceland on freezer trawler operations in terms of stamp duties and the resource levy.

According to the company, for a factory vessel to remain profitable, it needs to be able to fish for foreign operators in their waters, but this can only be done by re-flagging, and each transfer to another country, classed as a sale as the vessel in question is sold to a company in another jurisdiction, attracts a 1.60% stamp duty on the value of the vessel. This means that each such transfer costs around ISK100 million (€712,000) every time a vessel of this size and class is flagged to another country, and again when it is flagged back to Iceland.

The resource levy on fishing activities hasn’t been popular with Útgerðarfélag Reykjavíkur, and according to the company, there are serious inconsistencies in the the levy is applied, including a higher levy on species that are more expensive to catch. The company also stated that the agreements reached with seamen’s unions last year also affected the profitability of factory vessels.

‘As things stand, there’s a real possibility that factory trawler operations could be severely cut in the coming years, with the result that catch values are lost, along with the valuable knowledge and experience of crews in offshore fisheries,’ said Útgerðarfélag Reykjavíkur’s managing director Runólfur Viðar Guðmundsson, commenting that there are issues that have repeatedly been raised with government, to deaf ears.

‘Earlier this year a bill was presented to Parliament on abolishing specific stamp duties applied to fishing vessels so as to boost the opportunities available to them in offshore fisheries. But that this has not yet been debated in Parliament it speaks for itself.’

He added that the company is not opposed to fair resource levies, but is against the unfair levies imposed that are only useful to politicians and which are detrimental to efficient and responsible exploitation of marine resources.

Útgerðarfélag Reykjavíkur’s managers have attempted to highlight the obvious inconsistencies in the application of the resource levy, but have made little progress, which is demonstrated by the reviewed resource levy bill now before Parliament. We also hope that it will be possible to re-examine agreements with unions so as to not see more factory trawlers being sold abroad,’ Runólfur Viðar Guðmundsson said, commenting that Útgerðarfélag Reykjavíkur has long been proud of being a company paying some of the highest wages in Iceland, and would prefer for this situation to continue.

‘But the business environment for this need to be in place,’ he said.

The 66 metre, 5520kW Guðmundur í Nesi was built at Langsten in Norway in 2000 as Hvilvtenni for its original Faroese owners, and was acquired by Brim’s forerunners in 2004.

At the beginning of this year, Útgerðarfélag Reykjavíkur had four trawlers and expects to soon have only Kleifaberg remaining in operation.
A buyer is being sought for Guðmundur í Nesi. Brimnes is now operating as Spitsbergen for its new Russian owners, while Vigri and its operating company Ögurvík, which had been acquired by Brim some years ago, have been sold to HB Grandi. With the three factory vessels go 136 jobs.