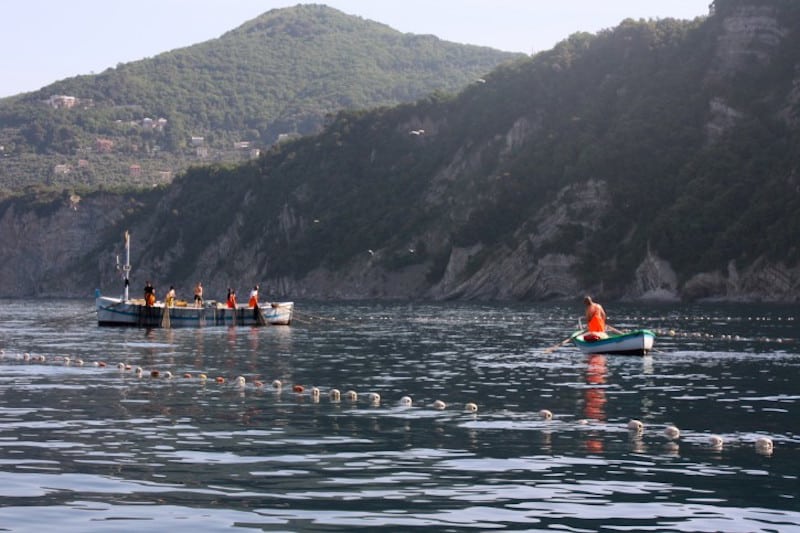 The two kilometre long, 40 metre deep tonnarella fishery, dating back to the 17th century and unique to the fishing port of Camogli in north-western Italy, has been severely damaged, putting it out of action for this year’s fishing season.

A boat seems to have strayed the fishing area at the end of April, damaging the fishing installation that is made out of biodegradeable coconut fibre netting, inflicting significant losses on the members of the local fishing co-operative that has run the tonnarella since 1982 and which is now protected as a Slow Food Presidium.

‘We had only been fishing for a month. The real season would have been starting right now,’ explained co-operative director Mario Mortola to Slow Food.

‘It’s likely that a large boat entered the fishery by mistake as only a large engine powerful enough to drive large propellers could cause this amount of damage. The system had 15 anchors, each weighing 150 kilos, but they were all wrenched up from the seabed. Because of the rough sea, we were only able to reach the scene the following afternoon. And when we got there, there was nothing left. The tonnarella wasn’t there any more.’

Divers checked out the scene and confirmed that the entire system had been moved from its moorings.

Camogli’s tonnarella of is unique in Liguria and one of the few such systems still in use in Italy.

According to Slow Food, it is also highly sustainable as it involves trapping fish between boats so that the fishermen can see their catch and release live specimens that are unmarketable or undersized. The tonnarella is active over a season from April to September every year and is also a popular attraction for visitors to the area.

‘We can rule out any more fishing for this year,’ Mario Mortola said. ‘It would take two or three months alone just to get the nets ready again.’

Previous instances of damage have been relatively minor and fixed after a few days.

‘The fishermen of Camogli naturally have all our solidarity,’ says Francesca Baldereschi, head of Slow Food’s Italian Presidia. ‘We’ll continue to follow developments and do what we can to support the community.’

Camogli’s tonnarella fishermen will be taking part in this year’s Slow Fish festival in Genoa, where Slow Food will grant them a free space as a token of solidarity.

The eighth Slow Fish event — the international event organised by Slow Food and the Region of Liguria — takes place from Thursday, May 18 to Sunday, May 21, 2017 in Genoa’s Porto Antico. Dedicated to the world of fish and marine ecosystems, this international event ties together the pleasure of food with the protection of marine biodiversity.