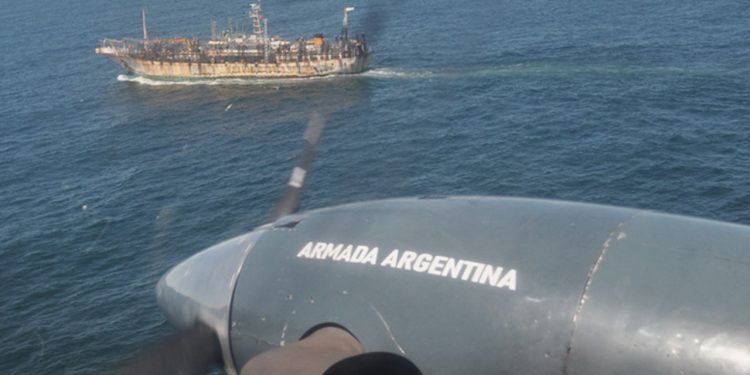 A fleet of high seas fishing vessels, reported to be more than 300 Chinese jiggers, longliners and trawlers, are being monitored by the authorities in Argentina as they emerge from the Straits of Magellan.

The Argentina Navy units, including ocean patrol vessel Bouchard and aircraft, are keeping tabs on the fishing fleet as it transits from the Pacific through the Chilean sector of the Straits of Magellan, to emerge into Argentinian waters on the Atlantic side.

The full transit of this fleet is expected to take some weeks, and Argentine Naval units are monitoring these vessels and compiling a detailed list of the fishing capacity heading for international waters beyond the Argentine EEZ.

This is the fist time that this fleet has been monitored in this way, with each vessel identified, contacted and its officers informed of penalties for deploying fishing gear in Argentinian waters. The fishing vessels are escorted to past Mile 200 and into international waters.

The authorities in Argentina have bene noticeably increasing monitoring and enforcement capacity in the region, with the new patrol vessel ARA Bouchard due to be joined by three more such vessels in the near future, and with a greater level of coordination between the Argentine Navy and Coast Guard in presenting an increasingly muscular response to fisheries infringements within its EEZ.

Argentina’s Minister of Defence Jorge Taiana reportedly slapped down questions concerning whether control should be extended beyond 200 miles to control exploitation of migratory stocks that pass through the country’s EEZ.

‘Argentina has to concentrate on taking care of what happens within 200 miles. IUU fishing outside 200 miles depends on international standards to which Argentina will contribute,’ he commented.
‘But the greatest responsibility in terms of exploitation of our waters is in the 30-year fishing licenses that Great Britain grants for resources that are ours.’

The South-West Atlantic, FAO Area 41, is the only region of international waters without a Regional Fisheries Management Organisation to oversee fishing activity. The longstanding rancour between Argentina and the UK over the Falkland Islands and refusal to co-operate are seen as one of the principal barriers to the establishment of such an RFMO for Area 41.