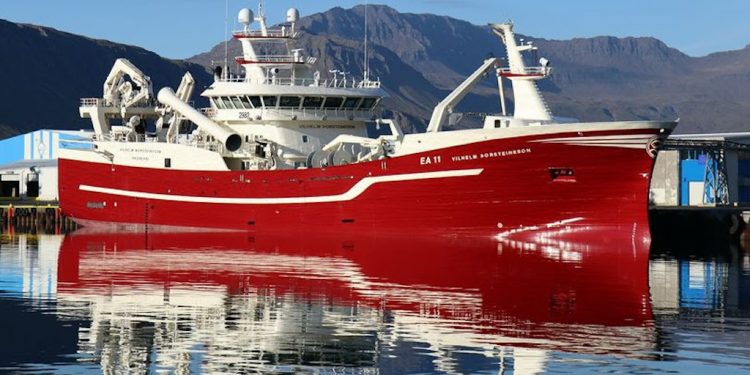 With its mackerel quota mostly caught by now, the Icelandic pelagic fleet is turning its attention to herring, and has around 100,000 tonnes of Atlanto-Scandian herring to be caught.

The first full landing to Síldarvinnslan’s Neskaupstaður plant was at the weekend, when Vilhelm Thorsteinsson docked with 1260 tonnes on board and production started on Sunday. This is herring in large grades, which is filleted or wholefrozen.

‘The catch is from the Héráðsflói area, which is where we have fished for herring in the last few years,’ said skipper Birkir Hreinsson, commenting that in 14 hours on the fishing grounds, this catch was taken in three hauls.

‘We finished up only 33 nautical miles from Neskaupstaður, so it could hardly have been more convenient. This is fine quality herring that’s ideal for processing. We expect to be able to catch a lot of herring in that area in the next couple of months, so this looks promising.’

He commented that this is a big change from the mackerel fishery, and having to steam six hundred miles to find fish.

‘The mackerel season looks like it’s coming to an end now,’ he said.

‘Vilhelm Thorsteinsson has a 10,000-tonne quota, so we’ll be busy from now on – and making a start like this is nothing to complain about.’