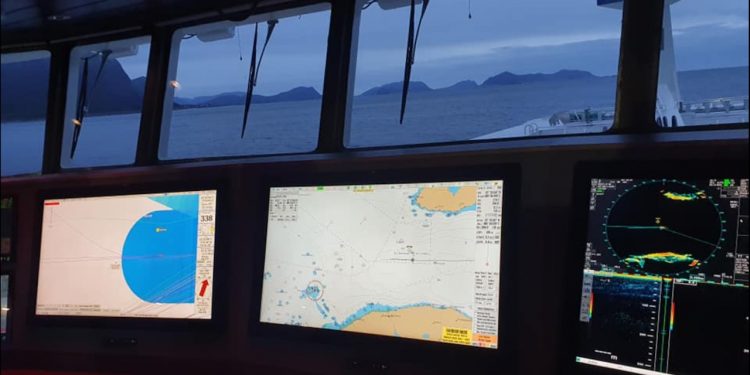 Heading into 2022 with all-Furuno wheelhouse

The owners of pelagic vessel Vikingbank opted for a package of electronics from Furuno Norge, supplied and installed by Vico, when their new vessel was delivered at the end of 2021.

Vikingbank’s owner Aleksander Vedø reported that the first trip last year was on mackerel, and it went well, all things considered.

‘There are always some adjustments on the first trip in any type of fishing. In addition to the fact that this is a brand new boat, this time was no exception,’ he said, commenting that they have plenty of experience with Furuno equipment, and the low frequency FSV-25S sonar is what they need for blue whiting and Atlanto-Scandian herring.

‘In the new year, we start on herring and continue on blue whiting, and we are especially looking forward to trying out the low frequency that everyone is talking about. The range and the clear picture that it provides will be very useful,’ he said.

Both Vikingbank and sister vessel Cetus, delivered in 2019, have been built by Fitjar Mekaniske Verksted, and both have Furuno navigation, communications and fishfinding systems fitted by Vico.

‘The collaboration with Vico has, as always, gone brilliantly. They have delivered the complete Furuno installation and did a great job,’ said Hugo Strand at Fitjar Mekaniske Verksted.

The difference between the installations is that Vikingbank has three 55-inch Hatteland monitors displaying information from a variety of feeds in a layout that can be customised by the user for different modes of operation.

According to Thore Østensen at Vico, this gives the wheelhouse design a more modern feel, and the skipper gets a tidier workstation by bringing together several displays on the same screen.

‘We have already delivered a Furuno installation to Cetus only two years ago, and the company has been very pleased with it. We are delighted that they choose the same package on this vessel. That’s a good sign,’ Thore Østensen said.

Main pic: During the mackerel fishery on board Vikingbank. Image: Anders Klovning /Cetus AS