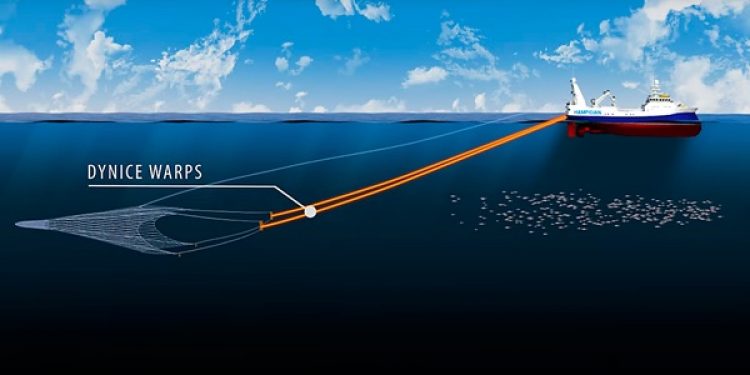 It’s now ten years since Icelandic fishing gear manufacturer Hampiðjan introduced its Dyneema-construction trawl warps as an alternative to conventional steel wire rope. Now the company’s developers have come up with a way to combine warps with power supplies, making it possible to route both energy and signals to the fishing gear via the warps.

Although the new Power Warps are aimed at controllable trawl doors that several manufacturers have been working on in recent years, it’s also clear that Hampiðjan has its eye so the gas and oil sector, where submersibles routinely operate at great depths, suspended on steel wire and with a parallel power/data cable running alongsie it.

Hampiðjan’s development of its DynIce Warps to the new Power Warps is achieved by incorporating an armoured co-axial cable into the core that can act as a power supply or be used to carry signals, and around this are six to eight power lines.

This development has been supported by the Icelandic Technology Development Fund and according to Hampiðjan’s product development manager Jón Atli Magnússon, there are big hopes pinned to this technology that can carry power to the fishing gear. Alongside the development work, a patent has been applied for on this new design of warp and the application process is underway.

The prospects are that this step forward in development will open new opportunities in fishing gear technology that will revolutionise fishing gears in the future. Trawl door manufacturers have been working on controllable trawl doors in the last few years and the advantages offered by DynIce Power Warps will be an integral part of this development.

It is now ten years since Hampiðjan first sold its DynIce Warps, replacing conventional steel wire warps, and these are now in use on board 150 to 160 fishing vessels around the world. The prime characteristic of the super-strong Dyneema material used in the warps is considerably less weight as the material has positive buoyancy. Its strength is around the same as steel wire of comparable dimensions.

According to Jón Atli Magnússon, DynIce Power Warps with a conductive core could be used under a variety of circumstances.

‘We’re looking at the oil and gas industry here. Research submersibles are used at great depths with a single steel wire and alongside this is a power and data cable. This could be replaced by a single warp that combines both roles. Steel wire is heavy and will part under its own weight once it reaches a depth of 6000 metres, but there is no limit to the length of DynIce Warps and the longest of these are around 12 kilometres, while the deepest undersea canyon is approximately 12 kilometres. Its working lifetime is also better as DynIce Warps never rust,’ Jón Atli Magnússon said.