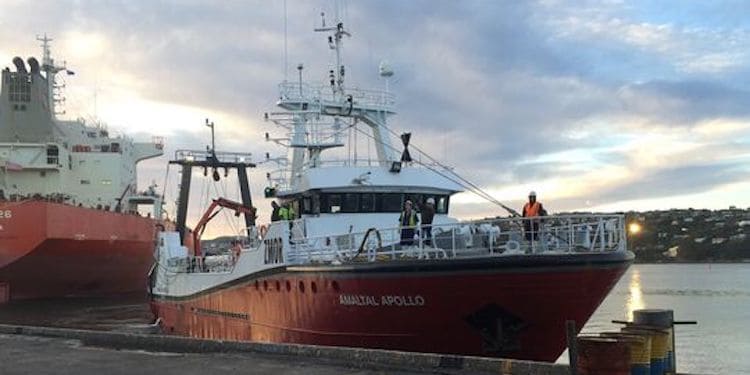 The former skipper of a trawler and fishing company Amaltal Fishing have been found guilty by a court in New Zealand of fishing offences that took place in 2018 when Amaltal Apollo deployed trawl gear in a protected area on Lord Howe Rise, in the Tasman Sea West of New Zealand.

At the time the area was closed to demersal fishing by the South Pacific Regional Fisheries Management Organisation (SPRFMO).

Amaltal’s Tony Hazlett commented that since 2018, the company has invested significantly in additional electronic systems for monitoring the operation of its fishing vessels, and it intends to continue to deliver on its responsibility to equip its skippers and crew with the training, instruction and the best tools needed to operate the vessels according to the law.

He said that in the case in which the skipper and owners of Amaltal Apollo have been found guilty, the company’s liability arises from the company being vicariously and strictly liable for the activities of the skipper, notwithstanding it had no knowledge of nor took any part in the offending.

‘The captain made an error, which the company was unaware of at the time. As soon as it was known, we acted immediately. The captain has also acknowledged and did not try to conceal his errors, and he and the company has co-operated fully with MPI in their investigation into the incident.’

‘Amaltal takes the sustainability of the marine environments where we fish very seriously, and does not condone illegal fishing in any circumstances,’ he said.

The court has yet to set a date for the sentence to be set.

‘This judgment should send a strong message that skippers and the companies they work for need to be diligent and ensure these types of breaches don’t occur. This includes having the correct systems in place,’ said MPI national manager fisheries compliance Niamh Murphy.

‘The rules are there for a reason. We expect fishing companies and skippers to know and understand their obligations before they go to sea.’