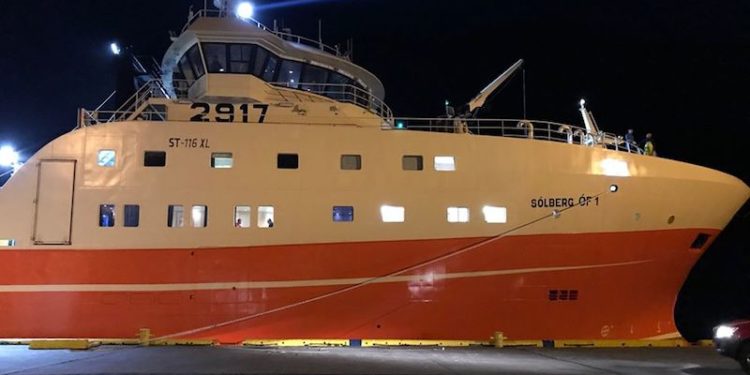 Getting the best from the trawl sensors

Earlier this year Scanmar Ísland’s Thórir Matthíasson joined one of Iceland’s top demersal trawlers for a trip to give the skipper and crew some instruction on how to get the best from their ScanBas365 system.

The 80 metre Sólberg ÓF-1 was delivered in 2017 by the Tersan shipyard in Turkey for Siglufjörður fishing company Rammi hf. It works four-week trips with a crew of 32, fishing with single and twin-rig Hampidjan gear spread with a 13 square metre pair of Thyborøn Type 12 doors.

Sólberg’s main fishing grounds are off the north-west of Iceland, fishing primarily for cod, haddock, redfish and saithe.

‘With all their seafood products for export and the main market being the UK, Sólberg must operate not only economically but also be as sustainable as possible. So it fitted out with a full processing filleting factory system that extends to include a state-of-the-art fishmeal facility and fish oil factory,’ Thórir Matthíasson said.

‘During the five days I spend last autumn on board Sólberg my focus was on teaching the skipper, Sigurbjörn Kjartansson on the operation of the new SB365 system and instructing the deck crew on the importance of the location of the sensors on the trawl for best results,’ he said.

Sólberg is geared up with the latest technology in trawl sensors with a full ScanBas 365 system with SS4 double distance door and clump sensors with all functions, including angle of the doors, depth, temperature, distance, TrawlEyes, SS4 Catch sensors with angle functions and flow sensors.

‘Having seen the system work well at sea, Sigurbjörn Kjartansson says that he very much likes how user-friendly the operation is – particularly with the function that allows him to create his own preferred screen layout and settings which he can then save to his own private log-in, meaning that if someone changes the layout, he can return to his preferences with a single click of a button,’ Thórir Matthíasson said.

‘Part of my brief was also the teach the deck crew about the sensors and how to work on them through the QBC-X1 programming and charger unit,’ he explained, adding that this simple intuition includes knowing about the easy-to-change FID code and how to adjust the power settings to get always the longest battery capacity for each sensor.

‘The deck crew were impressed that the battery lifetime on the SS4 sensors is very long and, in a trip of four weeks, they never needed to recharge the SS4 catch sensor once – and that the door sensors needed to be charged only one single time during the entire long trip – and, while remaining on the doors, only took one hour to fully charge to 100%.’

‘We also spent a lot of time on using the flow sensors,’ Thórir commented.

‘When double-rig trawling, we used flow sensors on both trawl headlines and it was very interesting to clearly see the flow speed and flow angle into the trawl. What was also very interesting was to observe and monitor how easy it was to keep good and direct flow straight into the trawls by adjusting the wire length on the port or starboard side, or the clump.’

‘By adjusting the wire, sometimes by just by few metres, you could see the difference immediately on the flow sensor box. This is probably the most underestimated sensor on the market, transmitting such important information as flow speed and flow angle into the trawl.’