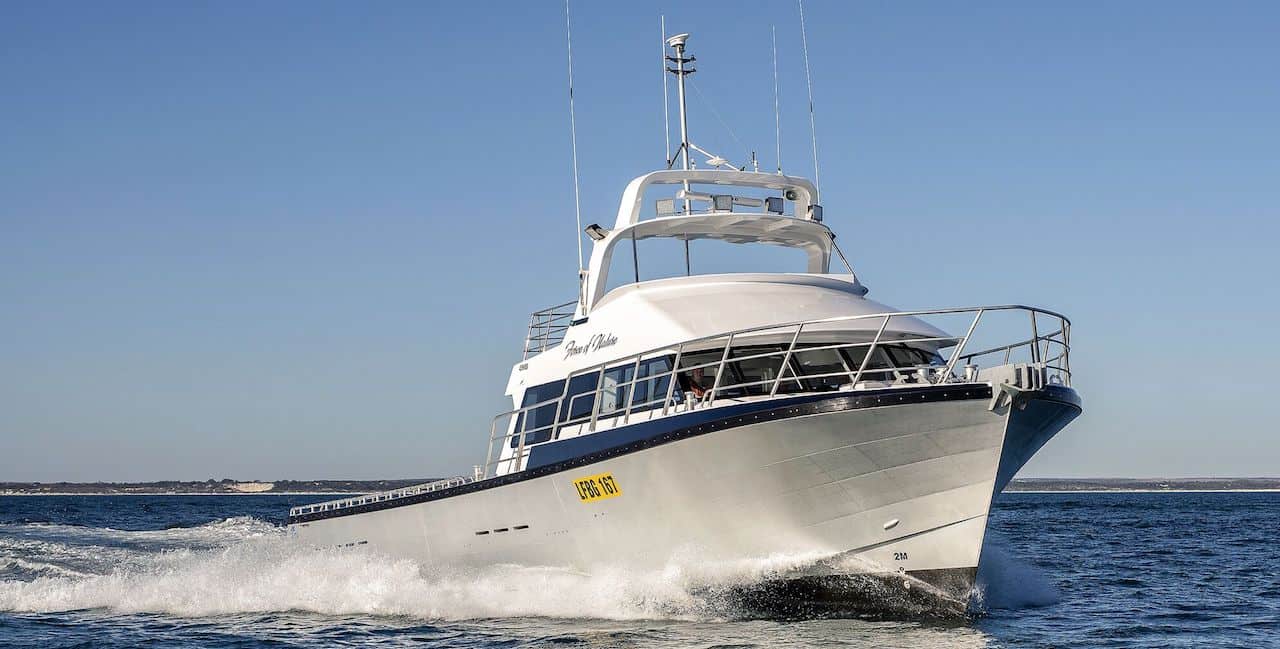 Dave Perham has plenty of experience in Australia’s Western Rock Lobster fishery, and has taken delivery of a new lobster boat from Dongara Marine that’s proven to have much lower fuel consumption than comparable vessels.

Completed in late April 2020, just a year after contracts were signed, Force of Nature is a 22.40 metre Southerly Designs monohull which, like other recent Dongara Marine fishing and pilot boat newbuilds, combines an aluminium hull with a composite superstructure.

The new boat’s live tank capacity for 84 baskets of lobsters is a considerable step up from his previous boat Natural Selection’s 64 baskets. Dongara Marine’s Managing Director, Rohan Warr, notes that the apparent jump in vessel size is a reflection of of industry trends.

‘When Natural Selection was built it was pretty much the average size crayboat, perhaps slightly above average. In the 1990s only a handful of new boats, maybe one in every 20, were over 70 feet. Now that’s the average size for new Australian high speed lobster boats, and in fact its more like 75 feet for the Western Australian fishery,’ he said.

‘So, while Force of Nature is quite a bit bigger than its predecessor, it’s not overly large by recent standards. That makes a substantial difference in terms of affordability compared to the likes of really big boats like Holdfast and Poppa G.’

As with those two previous fishing boats, Dongara Marine was the prime contractor for the Force of Nature project, taking with full responsibility for the vessel’s design, construction, and delivery. Dongara Marine already had three newbuilds and a major refit underway when Dave Perham confirmed he wanted to go ahead with the project, so Peter Ellis’s boatbuilders in Geraldton were brought in to fabricate the hull structure.

Force of Nature is the twelfth new Southerly Designs vessel that Dongara Marine has been involved in constructing in the past five years, and another is close to completion at the boatbuilder’s facility in Port Denison.

‘Our recent track record with them builds on that history, and has really proven and further developed the strengths and benefits of our partnership. Aside from the big export shipyards, there can’t be many, if any, other Australian boatbuilders who have produced similar sized boats in such quantities, and with such consistency, in recent years,’ Rohan Warr said.

‘The last six months have been challenging for everyone, and certainly for the lobster industry. We feel really fortunate to have been able to keep working, keep people employed, and keep business flowing through to our suppliers. All of that stems from the ongoing support of our customers. Fortunately, our flexibility means we have a variety of other projects underway and in development, and that puts us in a better position to weather the storm and maintain our capability for better times ahead.’

The 22.40 metre, 6.10 metre breadth Force of Nature is built with an aluminium hull and deck, topped with a resin-infused composite foam sandwich superstructure, laid out with a spacious aft working deck and a live tank capacity below for around 2500kg of lobster in 84 baskets.

The hydraulic systems on board have been fitted by Fleet Hydraulics and Geraldton Marine Electronics supplied the fishfinding and navigation hardware in the wheelhouse with a MaxSea Time Zero plotter, DRS 6A radar, 1150 echo sounder and GO3300 GPS set all from Furuno, while the AP70 autopilot and RS40B AIS set are from Simrad. Comms are handled via a Simrad VHF and a Barrett HF set. The wheelhouse also features a CCTV system and there are ISRI 6000 Series suspension seats.

Force of Nature’s twin 662kW at 2300rpm Scania DI16 076M engines each drive a fixed pitch propeller via a ZF510 gearbox. On trials and with full tanks of 7500 litres of fuel on board, this combination provided a 24.50-knot maximum speed and 18.50-knot cruising speed, each about 1.50 knots above expectations.

According to Rohan Warr, careful planning means the cruise speed is achieved when the engines are at peak fuel efficiency, which is a factor in making the latest crayboat highly economical to operate.

‘With Force of Nature we are seeing fuel consumption that is about 20% less than on other recent vessels with the same hull form,’ he explained.

Fishing family looks to the future

Newbuild for Ireland next year