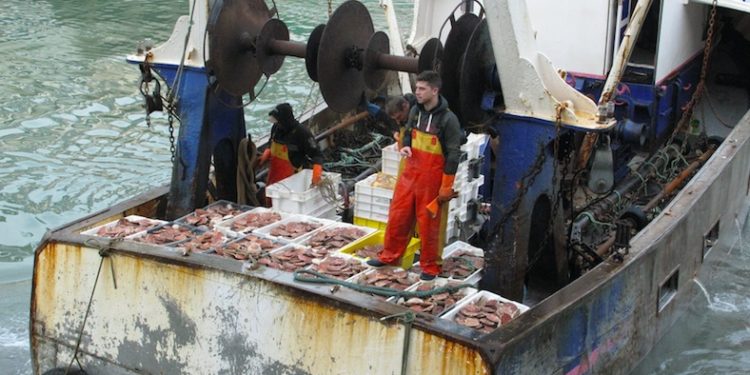 According to French fishing industry body CNPMEM, the French industry has made efforts to maintain sustainable and efficient management of scallops in the Baie de Seine, the area where a skirmish between French and UK fishing vessels erupted earlier this week.

The French fleet is limited to fishing from 1st October to 15th May, with further restrictions on fishing gears, fishing days and daily quotas.

‘The annual closure helps preserve the stock based on reproduction periods, peak growth and the recruitment of new cohorts which occur between spring and the end of summer, but for socio-economic reasons. The scallop market is mainly focused on the end of the year,’ a CNPMEM spokesman said.

‘CNPMEM regrets that for years, British fishermen have persisted in not wanting to fully respect these sustainable management measures that the French are proposing to adopt, refusing to include in agreements vessels of less than 15 metres and refusing to require a 92mm ring size. Since 2010, these agreements have made it possible to regulate, in exchange for fishing effort, the gradual opening of fishing areas.’

CNPMEM points out that agreements refer only to UK vessels over 15 metres, as smaller scallopers are not subject to kW/days, vessels that CNPMEM described as ‘being able to loot the area.’

‘While the proposal to impose 92mm rings on foreign vessels could be considered as subject to negotiation, the condition was to apply the agreement to all vessels regardless of size. Unfortunately, UK fishermen have rejected proposals for joint management of the area, arguing their right to fish rather than demonstrating a desire to sustainably manage the scallop stock,’ CNPMEM states.

‘It has not been possible to reach agreements for Baie de Seine this year and the exchange of fishing effort to the of the UK has not taken place. CNPMEM stands with the fishermen of Normandy and asks the French administration to quickly arrange a meeting between French and British fishermen’s representatives in order to find sustainable solutions leading to good management of resources,’ the French spokesman said.