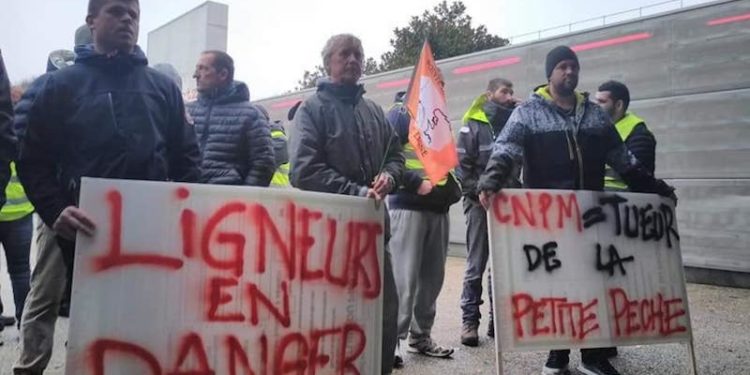 According to Plateforme Petite Pêche, representing French small-scale fishermen, commercial fishing for bass in the Bay of Biscay has been subject to an annual catch limit, set for 2018 at 2240 tonnes. But as of 22nd November, only 200 tonnes were left, less that 10% of the total at a critical time of the year.

The organisation predicts a closure of the fishery with the crucial holiday season approaching, with landings limited to 50kg per boat per day, regardless of vessel size, or how much bass they have already caught.

‘This situation is unfortunately not surprising because it only reflects the totally anachronistic way that fisheries management functions in France. The biggest boats are allowed to fish massively at the beginning of the year, leaving small amounts for the others, and the quota is finished before the end of the year,’ a spokesman for Plateforme Petite Pêche said.

‘These measures, which only favour the larger boats that decimate the bass spawning grounds, must be urgently revised.’

Plateforme Petite Pêche has in the past tried to raise awareness of this management style, with competition between trawlers, seine netters and gill netters targeting bass through the winter, with the result that small-scale line vessels that depend heavily on the bass fishery lose out. They have also highlighted that the 2017 measures of an annual limit and a 38cm minimum landing size have not been enough too rebuild the bass stock.

‘At the end of last winter, when the trawlers, gill netters and seiners had already landed 844 tonnes in just three months, we knew we could expect a very difficult end to the year. While measures should have been taken as early as this summer in order to help those most dependent of bass, the authorities and the National Committee of Fisheries (CNPM) waited until the last moment to act.’

‘Overfishing carried out during the winter by vessels targeting bass on spawning grounds is responsible for this unacceptable situation. By encouraging this irresponsible practice, the State, the CNPM and all the representative bodies are doubly guilty; of destroying the bass stock and guilty of destroying the fleet of trollers and small-scale fishermen who depend heavily on this species.’

Plateforme Petite Pêche states that by applying the limit across the board, it penalises those who rely most heavily on bass as for the trolling boats, a 50kg/day limit makes fishing unprofitable, especially taking into account days lost to bad weather

‘So as to avoid a bad end to the year for many boats, we have asked that from 28th November, the trollers be allowed to target bass, with a 100kg/day limit,’ a spokesman for Plateforme Petite Pêche said.

‘We call on all French and European politicians and the European Commission to open their eyes to the inability of the authorities and the CNPM to sustainably manage the bass in their waters. Once again, the Common Fisheries Policy and its provisions intended to favour small-scale fishermen are ignored.’

‘In addition, the latest scientific opinion on bass in the Bay of Biscay shows the stock declining and much stronger management measures are needed than those taken to date. We repeat our request for a complete biological rest for the bass in February and March. By drastically limiting overfishing during the breeding season, this measure will be beneficial for the bass, avoiding a moratorium such as the one applied since 2016 in the northern zone.’

Plateforme Petite Pêche is also asking for the minimum landing size not to be increased to 42cm, as this would jeopardise the economic survival of many vessels.

‘We applaud the European Commission for proposing for 2019 a renewal of the management measures decided in 2018. It would be inconceivable to relax these measures while the bass stock is still on the verge of collapse,’ the spokesman commented, adding that for 2019 CNPM has requested limitations that represent a call for an increase in bass catches in the northern zone.

‘These proposals are not acceptable. We also note with amazement that the CNPM proposes to reduce the ‘quota’ for the trollers to 6 tonnes while the Commission proposes 7 tonnes! How can the trollers be convinced that they are being defended by their ‘representatives’ under such proposals?’