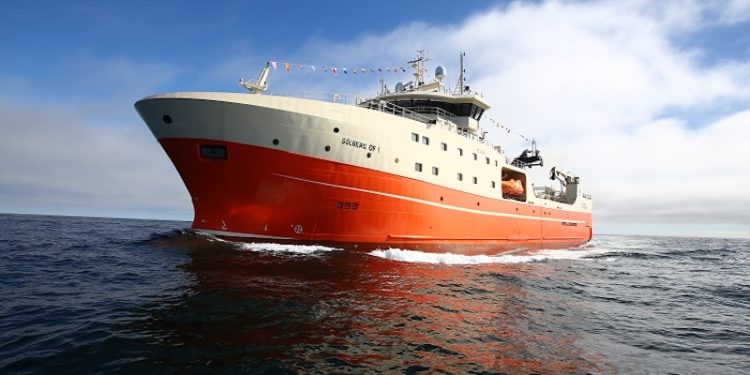 Icelandic factory trawler Sólberg has completed a record-breaking trip in the Barents Sea with a green weight catch of 1900 tonnes valued at ISK700 million (€5.18 million).

Sólberg docked in its home port of Siglufjörður on Monday this week after 37 days at sea, of which 30 days were spent fishing in the Barents Sea. All the indications are that this is a record-breaking trip for an Icelandic vessel.

The 79.80 metre, Skipsteknisk-designed Sólberg ÓF-1 was built for Siglufjörður fishing company Rammi at Tersan in 2016, replacing two of the company’s older vessels. Sólberg is skippered alternately by Trausti Kristinsson and Sigthór Kjartansson, who was in the wheelhouse for this trip to the Barents Sea.

This trip was also the first time that Sólberg has worked with a pair of Arctic 612 trawls from Ísfell. Spread with a pair of 5600kg, 12 square metre doors, these performed very well – as the full fishroom at the end of a month’s fishing indicates.

He added that most of the time they were fishing among a group of trawlers, including several others from Iceland, with all of them reporting much the same catch rates with the trawl gear they were using. But the difference lies in the engine revs.

‘We were towing these two trawls with the main engine running at 55-60% of full power,’ he said.

There’s some history behind the Arctic trawls from Ísfell that Sólberg used for this trip.

‘When Sólberg was delivered new, we supplied them with a single large Sóltoppur trawl for single-rig trawling, and they had a pair of smaller trawls from another supplier,’ said Jónas Thór Friðriksson at Ísfell.

‘Then they came to us for a pair of smaller trawls for twin-rigging, similar to the Sóltoppur design, and we supplied two Arctic 612 trawls that have a fishing circle of around 101 metres, each on a 28 metre footrope and with a 47 metre headline.’

He commented that the Arctic trawls and the Sóltoppur gear are both developed from the standard Hátoppur design that has been in widespread use with the Icelandic fleet for many years, with some adjustments made to streamline them and minimise water resistance without reducing fishing capacity.

‘Now we’re planning to produce scale models of these trawls so that we can carry out flume tank tests on them, so that we can get a clearer idea of what they look like under different towing conditions,’ he said.