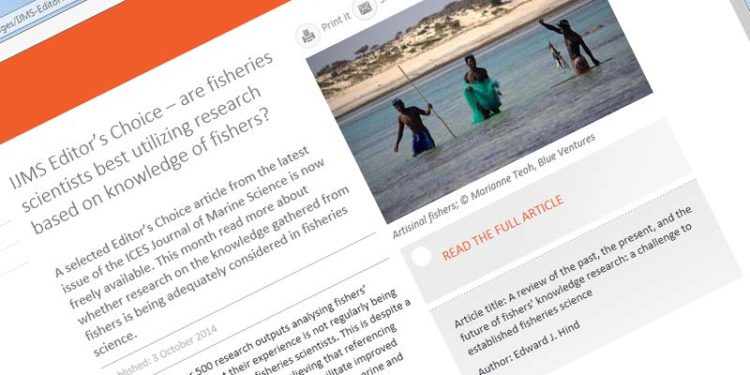 The knowledge of fishermen, which could be referenced to help prevent the catastrophic ecological collapses we are seeing in our lakes and oceans, is rarely being valued by fisheries scientists according to a recent review of over 500 scientific publications spanning nearly 100 years.
The study, published this week as Editor’s Choice by the ICES Journal of Marine Science shows that if scientists from Canada to Kiribati had worked more closely with fishermen over the last 100 years they could well have prevented infamous events like crashes in regional cod populations, as well as some of the rapid degradation we are currently seeing in tropical coral reef environments. Instead, they have relied predominantly on their own science which has not always been enough to prevent such damage.

Not all scientists have neglected the knowledge of fishermen. Amateur natural historians such as The Mutiny on the Bounty author Charles Nordhoff and modern day researchers like Dr. Barbara Neis of Canada’s Memorial University have championed the value of what they most often call fishers’ knowledge. Yet, they have not been as successful as they might have hoped with feeding fishermen’s experience into fisheries science.

The author suggests that all fisheries scientists and managers may need to start to consider the unique knowledge of fishermen documented by those like Nordhoff and Neis. “With fisheries [science] under increasing criticism, can such information be ignored?” he questioned. The review concludes by noting that the situation is tentatively changing, with more scientists gradually starting to pay attention to what fishermen know.

“Fisheries science […] is open to a change that includes the increased adoption […] of new knowledge cultures […]. The next decade will likely tell whether fishers’ knowledge will be part of that change.”

“Fisheries science […] is open to a change that includes the increased adoption […] of new knowledge cultures […]. The next decade will likely tell whether fishers’ knowledge will be part of that change.”

Copies of the full study are free for download here.