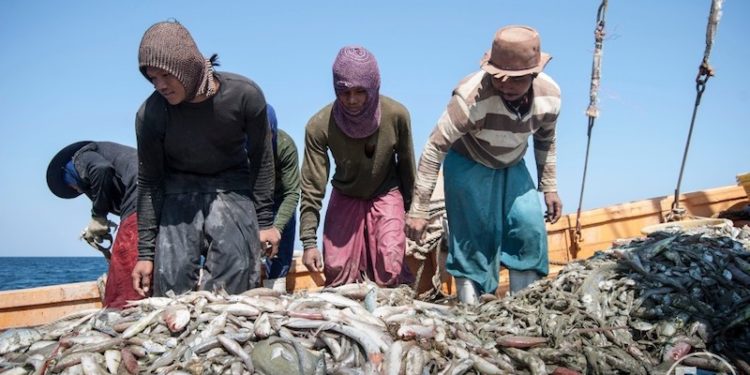 Thailand became the first country in Asia to ratify the Work in Fishing Convention, which sets basic decent standards for work in the fishing industry. According to EJF, this shows important commitment and leadership for the region – although EJF points out that there are still improvements to be made.

‘Thailand has made strides forward in eradicating the illegal fishing and human rights abuse that has plagued its fishing industry,’ a spokesman for the Environmental Justice Foundation (EJF) said.

‘The country’s monitoring, surveillance, and enforcement capabilities have shown good progress, including innovative efforts such as the use of covert patrol vessels to catch vessels fishing illegally in Thai waters. This progress has been recognised by the EU, and the country’s yellow card trade warning over illegal fishing was lifted earlier this year.’

EJF has points out lingering shortcomings that it sees as preventing Thailand’s fishing industry from becoming truly ethical and sustainable. According to EJF, inspections are not always rigorous, and cases have been identified of skippers signing on behalf of crew to confirm they were given breaks, and migrant crews’ payment documents and ATM cards being held by the vessel owner on shore.

The organisation has also drawn attention to the Thai Government’s current consideration of allowing skippers to employ 16-year-olds on fishing vessels.

‘While several measures to protect against abuse have been put forward, such as only allowing Thai nationals that are relatives of the skipper, and forbidding them to work at night, permitting 16-year-olds to work in an industry prone to abuse could be a step backwards,’ said EJF’s spokesman, adding that protective measures are good in theory, but enforcement would be difficult, if not impossible.

‘Thailand is to be applauded for taking the significant step of ratifying C188,’ said EJF’s executive director Steve Trent.

‘But the country still needs to work on several of its measures to truly eradicate illegal and unethical fishing. In this case, how are inspections going to improve so that the authorities can be 100% sure that no 16-year-old apprentices are forced to work at night? Such a retreat by the Ministry of Labour could also lead to uncertainty amongst international seafood buyers, who will obviously want to ensure that children are not being exploited as part of their supply chain.’

EJF also points to the fact even industry representatives have reservations.

Mongkol Sukcharoenkana, chairman of the National Fishing Association of Thailand, the main body representing the interests of commercial vessel owners in Thailand, was quoted as saying that hiring under 18s would be a step backwards despite being ‘technically’ allowed within the C188 framework.

‘For a country that has a history of being a progressive force for combatting child labour, this could be a disappointing move in the wrong direction,’ EJF stated.