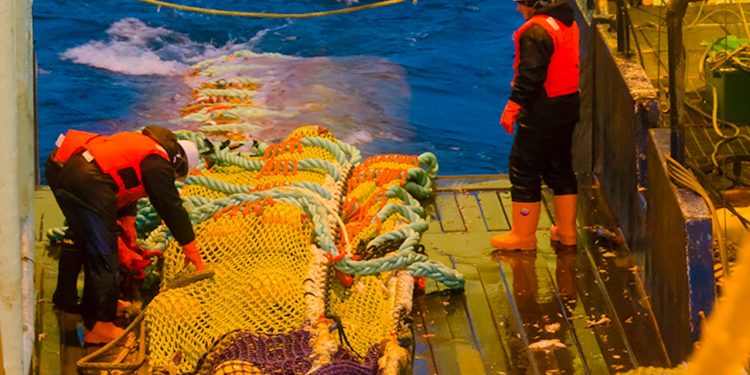 The EU pelagic fishing industry has strongly condemned the decision by the Faroe Islands to license Russian vessels to fish for blue whiting in the Special Area that lies between the UK and the Faroe Islands.

‘The proceeds of this Russian fishery will further facilitate Russia’s war waged on Ukraine, which has led to needless death, destruction and human misery,’ said Tim Heddema, chair of the European Association of Fish Producers Organisations’ Northern Pelagic Working Group.

‘The continuing licensing and full servicing of Russian vessels by the Faroe Islands is a deplorable and unacceptable action, as is the damaging unilateral increase of their blue whiting quota to use as currency for quota swaps with Russia. The Faroese government needs to rethink its actions without delay.’

Both the Faroe Islands and the UK have fisheries jurisdiction over the Special Area, lying off the north coast of Scotland and to the west of the Shetland Islands, and international agreements allow them to allocate related fish quotas to third countries.

The Faroe Islands had already granted permission in November 2021 to Russia to fish a quota of 75,000 tonnes of blue whiting plus a 5565-tonne balance carried over from 2021. Russian vessels are also granted access to the Faroese Fishing Zone, in exchange for fishing opportunities for the Faroese fleet in the Russian Exclusive Economic Zone.

Russian vessels continue to be fully serviced by the Faroe Islands, including re-fuelling and the ability to tranship catches to reefers.

In addition, EAPO states that due to new unilateral quota increases by both the Faroe Islands and Russia, the sustainability of the blue whiting stock is put in jeopardy. A significant part of the 226% Faroese quota increase is likely to have been handed over to Russia, in exchange for demersal stocks such as cod for the Faroese fleet.

‘EAPO welcomes the tough stance that the UK government and the Scottish pelagic industry have taken on these developments and we call on the European Commission to also address this issue in the strongest possible terms with the Faroe Islands,’ Tim Heddema commented.

‘The Faroese actions are extremely ill-advised and, if not revoked, should have bearing on the EU-Faroese fisheries relationship.’