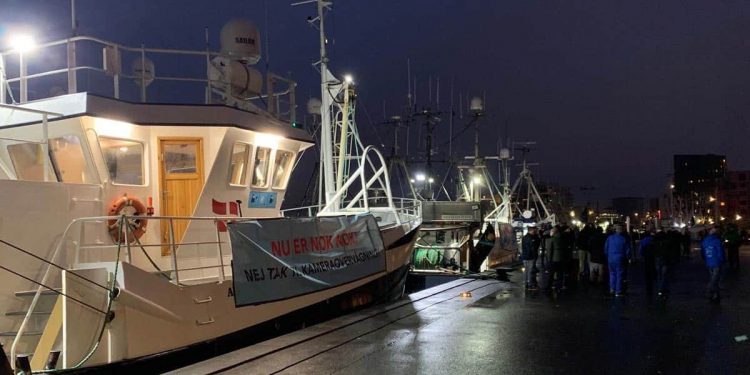 Angry Danish fishermen are gathering in Aalborg for a protest taking place outside the city’s Congress and Culture Centre. A fleet of fishing vessels steamed early this morning into Limfjord and tied up in the centre of the city, before crews made their way to the Congress Centre.

The protest centres around plans to make camera surveillance mandatory for fishing in the Kattegat, although this issue is just the latest in a long series of frustrating measures that have been introduced in recent years. The camera proposals are the final straw, and Denmark’s fishermen are ready for a fight.

Slashed cod quotas and the ongoing uncertainty over the UK’s departure from the European Union key issues, leaving the Danish industry in a longstanding state of uncertainty, compounded by a flood of regulation that fishermen see as being implemented to frame fishermen as villains.

‘We’re treated like criminals,’ said Læso trawlerman Thomas Christiansen, one of the protest organisers. ‘And we say stop. Enough is enough.’

He is one of those who has already taken the step of putting his boat and quotas up for sale as he prepares to leave fishing for good.

‘It’s hard enough as it is being a fisherman,’ he said.

‘We do our best to keep our heads above water, in spite of the constantly changing regulations that not only affect the way we work, but also rule out any possibility of establishing a stable family life.’
Under the ‘Enough is Enough’ and ‘No to Cameras’ banners that the crews of around forty fishing vessels carried through the city to the Congress Centre, the fishermen are demanding an end to the constant suspicion of the industry that is the hallmark of official dealings with fishing, and an end to endless accusations that the fishing industry has an ingrained culture of cheating and breaking rules.

‘We have had enough of politicians who promise everything, and we have had enough of officials and politicians who take no notice of what the industry has to say, yet make decisions that affect our everyday lives,’ Thomas Christiansen said as the protest got underway in Aalborg, ahead of this morning’s planned meeting between Minister of Fisheries Mogens Jensen and the Danish Fishermen’s Association.

He added that the industry’s position is a resounding No to camera surveillance – and this proposal has succeeded in uniting the whole of the Danish fishing industry in a way that is rarely seen as fishermen have come together to protest against the way the authorities have continued to treat them.