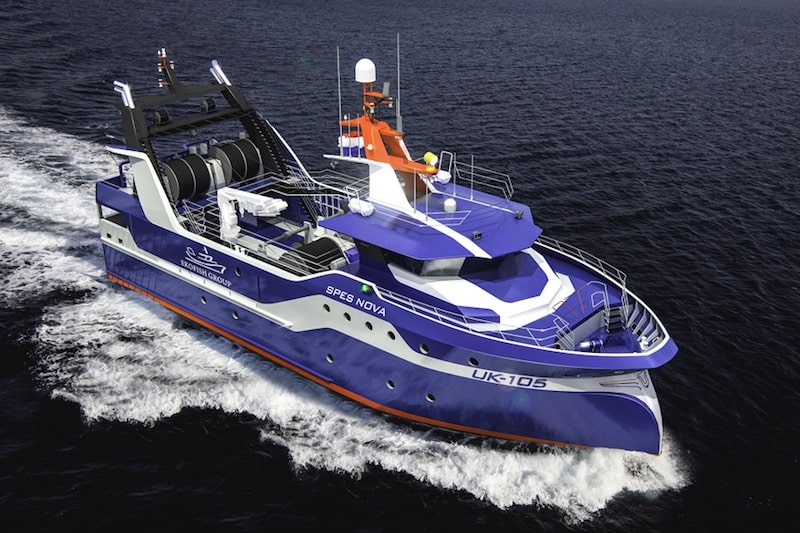 Urk fishing company Ekofish Group has placed an order with Maaskant Shipyards in Stellendam for a new twin-rig trawler to be built in line with Ekofish’s focus on sustainable fishing methods.

Ekofish and the de Boer family behind it have a history that goes back more than a century. Ekofish departed from the conventional model of beam trawling some years ago to concentrate on other methods, and was the first European fishing company in the flatfish sector to achieve MSC certification in 2009.

The design of the new vessel has been a collaboration between Ekofish, Damen Maaskant Shipyards Stellendam and naval architect Vripack. ‘We got together in March 2017 to design the various design parameters,’ said Ekofish’s Louwe de Boer. ‘We wanted something innovative; in that respect we are not scared of change.’

The new vessel is designed with a 32 metre overall length and a 9.60 metre beam. Construction of the hull is being carried out by a yard in Poland, starting early next year, and completion of the new trawler is scheduled for the first quarter of 2019.

‘This has been a very enthusiastic cooperation – combining Damen’s know-how with our own fishing experience,’ Louwe de Boer said.

‘We were invited to look at the creation for the trawler with a fresh pair of eyes; approaching the project from a non-conventional angle from our position of a holistic design and naval architecture studio,’ said Ierring Faber, naval architect at Vripack.

‘In the next phase of the project, the valuable input from Maaskant Shipyards made the design develop into a feasible fish trawler while still doing justice to the innovative concept design that we started off with.’

The design team aimed to optimise the efficiency of the vessel’s systems wherever possible. The power plant will also be supplemented by a battery pack.

‘The vessel will have diesel-electric propulsion, using three generators lined up to a DC-Bus. This will reduce the peak load demands that are characteristic of the operational profile of fishing vessels,’ explained Maaskant Shipyards’ Eric Moerkerk.

‘The batteries can be used for short-term tasks at sea, and also while in harbour – removing the need to use the main engines. They can be charged in various ways; during periods of engine overcapacity or even capturing the energy created when the winches are paying out. These techniques are ground-breaking for the fisheries industry.’