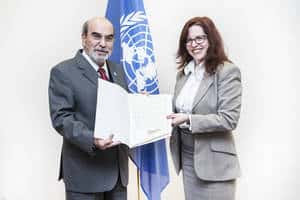 ‘Cuba’s accession to this international treaty is a sign of the political will of the Government of Cuba to contribute in an effective and concrete way in support of measures for the protection and sustainability of ecosystems and the preservation of marine biodiversity,’ Ambassador Alba Soto Pimentel said.

The FAO Director-General strongly welcomed Cuba’s accession. ‘I am sure it is an example which will be followed by many other countries in the Caribbean region,’ José Graziano da Silva said.

The FAO-brokered Agreement, which will create binding obligations, comes into force when 25 countries or regional economic blocs have deposited their instrument of adherence with the FAO Director-General. With Cuba’s adherence 23 countries and the European Union, on behalf of its members, have deposited 24 instruments of adherence. Among the latest are Barbados, Guyana, Republic of Korea, South Africa and the United States.

José Graziano da Silva has expressed confidence that the target of 25 could be reached by July this year.

Port State Measures set standards for inspection of foreign vessels that seek to enter the port of another State. Importantly, the measures allow a country to block vessels suspected of having engaged in illicit fishing and thereby prevent illegal catches from entering local and international markets.

To assist countries in building their capacity to implement the Agreement, FAO has convened a series of regional workshops around the world, with participation from over 100 countries.

MSC hits back at On the Hook campaign

The European Commission to invest €14.50 million in new maritime projects