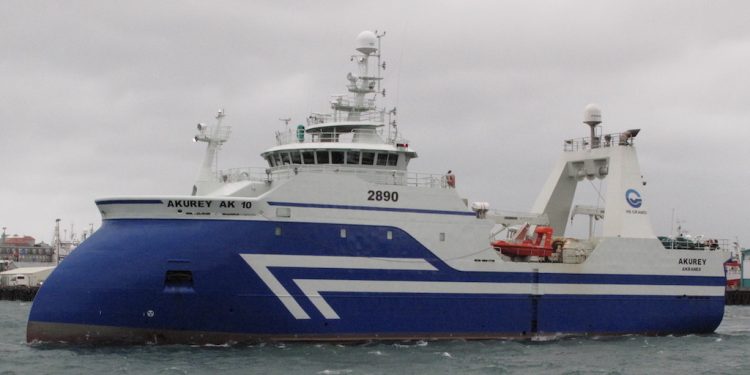 ‘The Marine Research Institute’s advice on redfish for the next quota year is completely crazy,’ said Eiríkur Jónsson, skipper of Brim’s fresher trawler Akurey, which docked yesterday after a short trip with 115 tonnes on board.

He has slammed the official advice to cut quotas for golden redfish by 20% for the 2022-23 quota year which opens on 1st September, stating that this could sound the death knell for some fishing companies and warned of golden redfish becoming a choke species that could result in the fleet being unable to operate for months.

‘The scientists are recommending a 20% reduction in fishing for golden redfish next year and are telling us this is because the fishery is sustained by just two year classes. That’s just rubbish. Going by our regular samples, catches are made up of six to seven year classes, which is the way it should be,’ he said, commenting that Akurey’s latest trip has been half and half saithe and redfish, plus small amounts of other species, and a further reduction in the golden redfish quota could make it impossible to catch saithe quotas.

‘I’ve been on trawlers since 1975 and I can be certain of what I’m saying when I tell you that there is redfish practically everywhere. It hasn’t always been like that and I recall being at a meeting with the scientists back when the golden redfish stock was at its lowest point. That was when the Institute’s chief redfish specialist, who is now the Institute’s director, told us to be prepared for thin years ahead for the redfish fishery,’ he said.

‘The reality was precisely the opposite. The redfish stock recovered rapidly and has been strong ever since. We take regular samples and according to those, we are fishing six or seven year classes. We always get older specimens, but we don’t count those in the samples,’ he said and commented that over the last few years 90% of traditional fishing grounds have been put off-limits.

‘Just the company I work for is looking at a 1500 tonne reduction in golden redfish next year. That’s a year’s catch for one trawler. The redfish situation was bad enough already this year. Many of us have responded by increasing the codend mesh size to 155mm, on grounds such as the Hali. That means that redfish squeeze out of the trawl through the meshes. But it’s hardly possible to see that as a good way to look after the resource,’ Eiríkur Jónsson said.