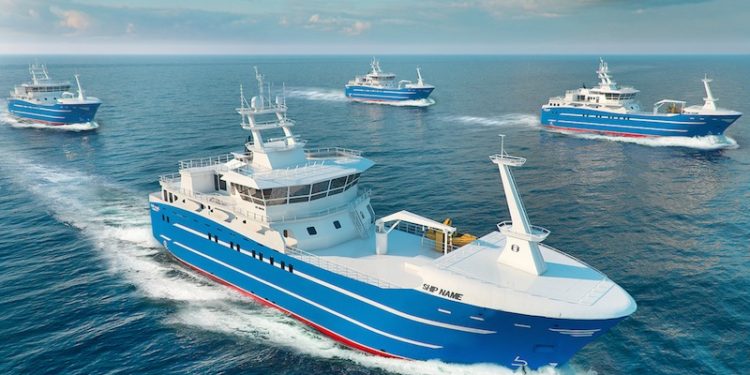 The Northern Shipyard (Severnaya Verf) in St Petersburg has begun construction of a new freezer longliner for Akhangelsk company Globus. The new vessel is part of a series of new longliners for Russian owners, designed by Norwegian company Marin Teknikk.

A keel-laying ceremony was organised alongside the Fisheries Forum and Exhibition held in St Petersburg last week, with the new vessel named Marlin, and it will follow the Gandvik-1 which was laid down earlier this summer.

Marlin is a 59 metre LOA, 13 metre beam longliner, with the concept developed by Marin Teknikk and with the relevant documentation completed by the Northern Shipyard. It is designed for a handling capacity of 30 tonnes of fish per day and to have a 45-day endurance.

‘I want to thank the developers of the investment programme, which enabled the renewal of the fishing fleet,’ said Globus CEO Andrey Zaika.

‘I thank the shipyard employees in advance. I am confident that we will between us build a ship that we can be proud of together.’

‘We are taking part in a big event – the keel-laying of another fishing vessel at a Russian shipyard,’ Dmitry Patrushev said.

‘This is the result of serious work of ministries and departments, industry associations, enterprises, and shipbuilding groups. The programme of investment quotas, thanks to which this event is possible, is unprecedented, both for the Russian and the global fish industry.’

‘I hope that this is not the last fishing vessel that will be built at your shipyard,’Ilya Shestakov commented.

‘Our shipyard is taking an active part in the construction of vessels of the fishing fleet. At the end of November we will lay another vessel, a factory trawler for Russian fishing company Norebo,’ said Northern Shipyard general manager Igor Ponomarev.