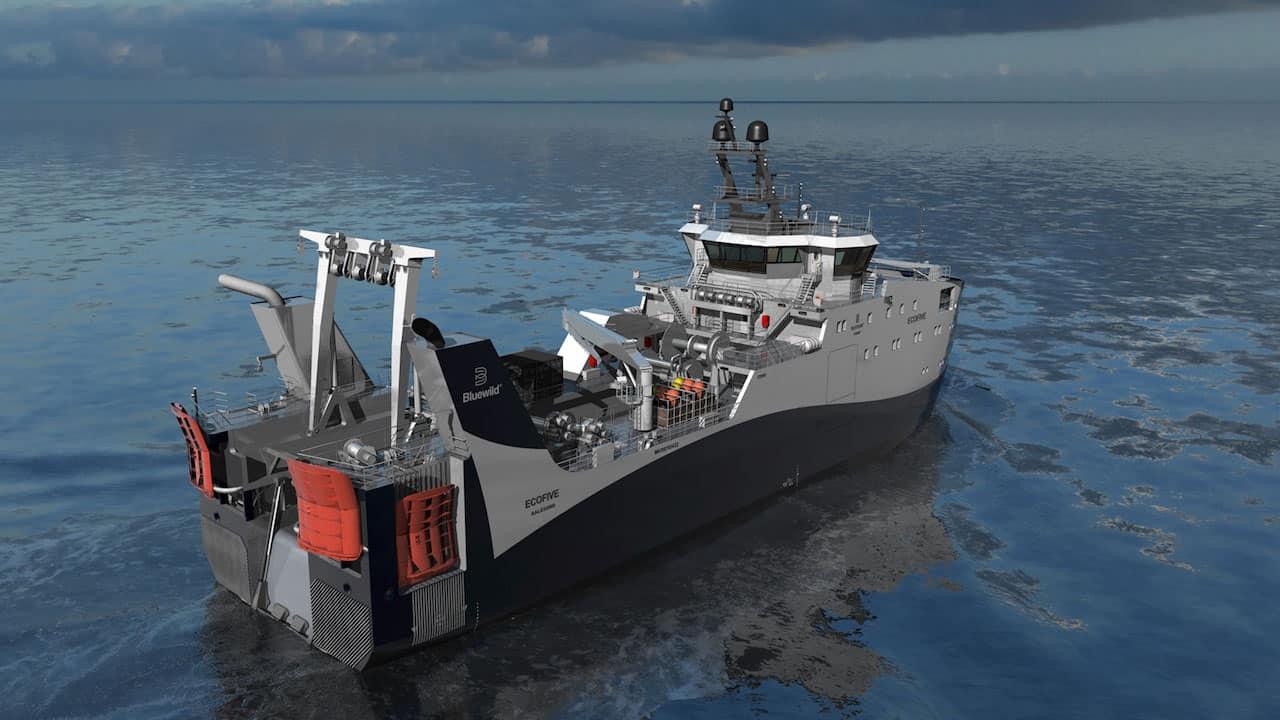 Ålesund fishing company Bluewild has placed an order for an innovative new trawler to be built at Westcon Yards. Ulstein Design & Solutions have developed the Ulstein FX101 design and this marks the outset of a new direction for Ulstein.

The design of the new vessel, scheduled to replace Bluewild’s Ishavet, built in 2013, and Langenes, which was built in 1986, is focused strongly on the gentlest possible catch handling, coupled with minimising energy consumption

The Ulstein FX101 is a 73.20 metre stern trawler with accommodation for up to 30 persons and with a 2000 cubic metre fishroom capacity. The X-BOW® forward section design contributes to smooth running with fewer abrupt ship movements, and less water on the deck. The trawl deck arrangement allows for pelagic trawl and quad-rig demersal trawl operation.

At the heart of the new vessel is Bluewild’s EcoFive concept, setting ambitious standards for minimal energy consumption, catch utilisation to the greatest extent possible, extraction of nutritional value, and the highest possible quality of the end product.

To meet Bluewild’s requirements, Ulstein has developed what it seen as a new standard for factory trawlers. Painstaking analyses at the beginning of the design process and extensive collaboration with the owner’s team have led to a new configuration for such vessels, adapted to the owner’s desired operating profile and production philosophy.

This includes a system for catch reception and storage developed by Ulstein that will, as far as possible, keep the catch alive until processing. By transferring fish directly into separate tanks, the loss of quality during capture and storage in dry receiving bins is avoided, and the factory can work more steadily at its optimum capacity.

A hybrid energy system is also central to the customer’s requirements, combining the best features of diesel-electric and diesel-mechanical propulsion, supported by a large battery pack. Two large-diameter propellers with rudder nozzles increase manoeuvrability and towing power and help to minimise energy loss at rudder angles. Surplus energy, such as the return energy from the winches, is routed for storage in the battery pack and excess heat from the engines will be recovered and used where desired elsewhere in the ship.

Based on the operational profile of the ship, Ulstein has planned the propulsion system and system integration to enable fuel savings of at least 25% per kilo of fish product produced compared to a conventional power system. In some operations, Ulstein predicts that together with other energy-saving measures, this figure could exceed 40%. This significant reduction in energy consumption will not only lead to reduced fuel costs for the ship owner but will also result in a significant reduction in greenhouse gas emissions.

The trawler will be built at Westcon Yards in Ølensvåg, which has four yards along the Norwegian coast.

‘They are a good partner for us. It is gratifying to see that we can once again supply design and equipment to a Norwegian shipyard for the construction of an innovative vessel,’ said Erwin Jager, sales manager fisheries at Ulstein Design & Solutions.