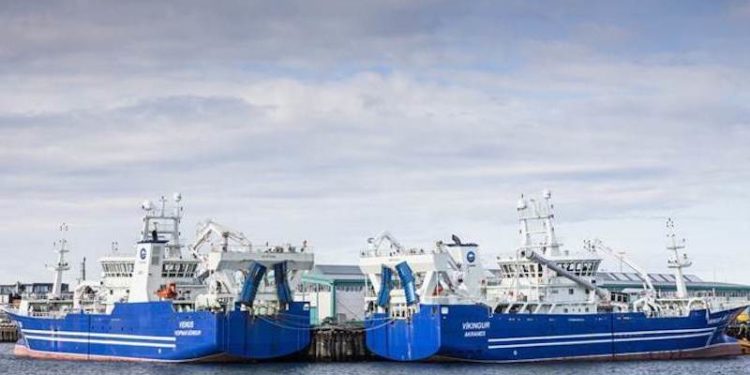 Blue whiting over for the year

The Icelandic pelagic fleet has tied up for the year after finishing on blue whiting, just as heavy weather hit the fishing grounds and catch rates had dropped away.

Börkur’s skipper Hjörvar Hjálmarsson said that there had been relatively little fish to be seen in the Faroese waters where they have been concentrating on blue whiting recently.

‘We had only taken two hauls and had 200 tonnes on board. It had been pretty bad for the last few days, down to 5-6 tonnes per towing hour,’ he said, adding that with a storm forecast for the next few days, the decision had been taken to cut things short and head home for Christmas.

HB Grandi’s pelagic vessels Venus and Víkingur have also tied up for the rest of the year, having made their final landings totalling 3000 tonnes in Eskifjörður at the end of last week, as work is currently in progress to upgrade the HB Grandi fishmeal plant in Vopnafjörður.

‘We can say that the blue whiting fishing came to an end by itself at this point. Now Christmas is ahead of us just as a four-day storm is forecast and fishing has been slow. So it was decided it was time to head for home, even though we only had 800 tonnes on board, and to call it a day for this year. There’s some quota left that we can use up next year,’ said skipper Hjalti Einarsson.

He commented that the next steps are unclear, but they will be in port in Reykjavík over Christmas and New Year.

‘It’s very positive that there have been sightings of capelin on Westfjords fishing grounds, but we won’t find out what the quotas are likely to be until the research survey assesses the capelin stock next month,’ he said.