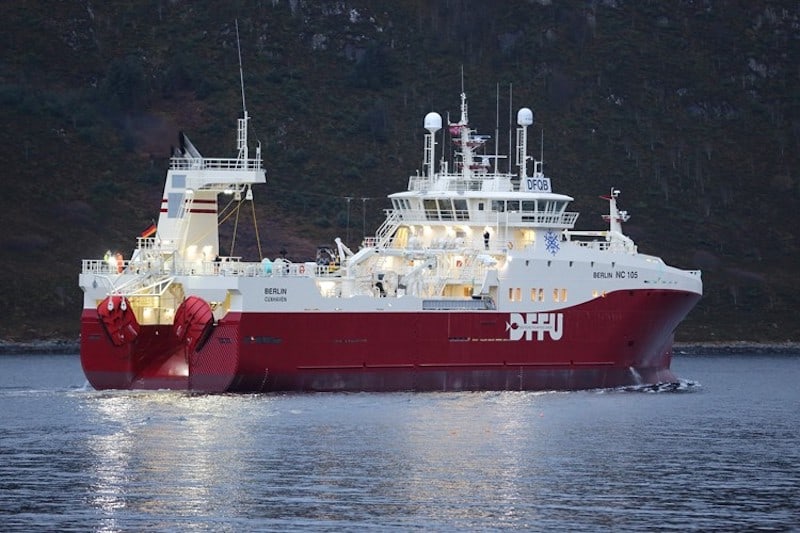 The second of two new 81m LOA by 16m beam factory trawlers for Samherji’s German subsidiary DFFU is now it its first trip for the company.

The first of the two new Rolls-Royce-designed trawlers, Cuxhaven, was delivered in the summer and started fishing in August and has now been followed by Berlin, which has now sailed for its first trip. The trawlers were built by the Kleven yard at Myklebust in Norway on hulls fabricated at the Crist Shipyard in Poland and are due to be followed by Emeraude, which is being built for Compagnie des Pêches in St Malo.

The series of trawlers is built to Rolls-Royce’s wave-piercing NVC 374 design with an 81 metre overall length and a 16 metre beam, as well as being packed with Rolls-Royce equipment, including the 3600kW B33:45L6 main engine driving a 102A1/4E-B/P/N-3700 propeller via a 850 GHC-SC600 reduction gearbox, plus an 1843ekW C25:33L9A auxiliary engine and a 540ekW Scania auxiliary engine. The 640kW tunnel thruster is from Rolls-Royce.

Rolls-Royce supplied the 49 tonne trawl winches, the 45 tonne net drum, 17 tonne sweepline winches and 26 tonne gilsons, and the 3t/8m and 4t/15m deck cranes are from MacGregor Triplex. The Blue Line trawl blocks are from Markussens Metalvarefabrik.

Factory decks are designed and outfitted by Slippurinn in Iceland and Optimar in Norway with fish processing equipment supplied by Velfag and Marel. The refrigeration system is from Kælismiðjan Frost and the fishmeal production plant is from Héðinn, and Optimar supplied the cargo lift.