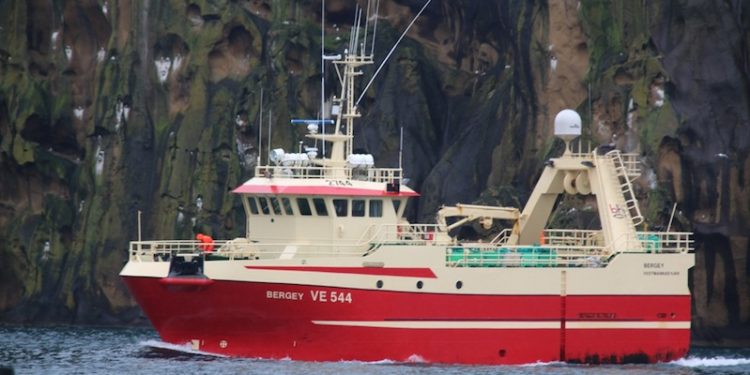 Síldarvinnsla subsidiary Bergur-Huginn has signed a contract to sell one of its two groundfish trawlers to Grundarfjörður company Guðmundi Runólfsson hf, with a handover date no later than September.

Fishing company Guðmundur Runólfsson has bought Bergey VE-544, which is one of the two Bergur-Huginn suster vessels which are both due to be replaced later this year by new vessels under construction at Vard in Norway.

Bergey was built at Gdynia in Poland and delivered in August 2007, and over the years has landed 39,000 tonnes of fish. Bergey broke the ISK10 billion barrier for its accumulated catch values earlier this year.

According to Guðmundur Runólfssonar’s managing director Guðmundur Smári Guðmundsson, the company is set to open a new, high-capacity processing plant and there is a requirement for it to be supplied, while Bergey will replace an older vessel.

‘We believe that a quality vessel like this will suit our operations. We already own a comparable vessel and it makes economic sense to operate them together. We are very satisfied with this purchase,’ Guðmundur Smári Guðmundsson said.

Bergur-Huginn’s former managing director, Magnús Kristinsson, who remains on the company’s board, commented that there’s an element of regret in seeing Bergey go.

‘In my opinion Bergey and Vestmannaey are the most successful fishing vessels that have fished in Iceland. We can see in black and white exactly how much they have landed and what the catch values are. These trawlers have done exceptionally well, and have always been manned by top crews,’ he said.

‘I’m also excited at the prospect of the new vessels the company is building and hope that they’ll be as lucky ships as the old ones have been. There are exciting times ahead.’