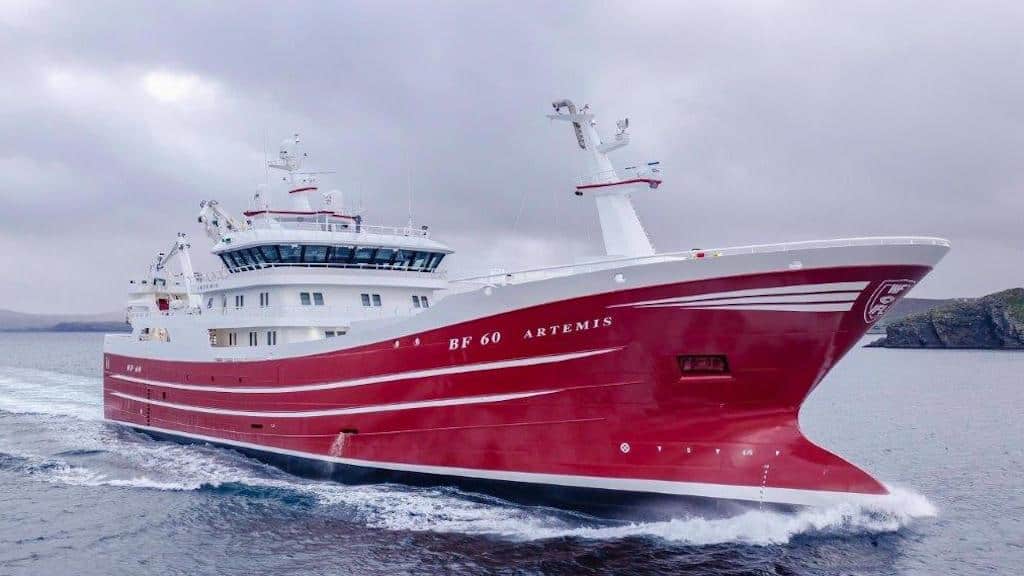 The latest pelagic vessel to join the Scottish fleet has been built for a partnership between Interfish subsidiary Northbay Fishing Company and the Wiseman Fishing Company, headed by Scottish Pelagic Fishermen’s Association (SPFA) chairman Alex Wiseman.

The Northbay-Wiseman partnership went to Karstensens Skibsværft for their new pelagic vessel, with a design, spec and arrangements finalised in co-operation with the yard’s design team to achieve optimum standards for the crew, the best possible catch-handling and storage, and optimised performance and fuel consumption. To achieve these goals, nothing has been spared in outfitting Artemis with the latest systems and equipment.

The new vessel’s hull was built at the Karstensen Shipyard Poland, and arrived in Skagen in February 2022 for outfitting.

The 75.70 metre Artemis has a 15.60 metre beam and a 2313 cubic metre capacity in its 12 RSW tanks. There’s a pair of 20-inch SeaQuest fish pumps deployed from the at fish pump deck and catches are routed to the separator and from there to the selected tanks. The owners opted for a twin Johnson Controls 1400kW/1.204.000kCal/h RSW system with a C-Flow vacuum system for discharging.

The trawl deck layout has a Karmøy Winch package, with a pair of 91-tonne trawl winches controlled by a Karmøy Winch management system. There are 110-tonne net drums in a waterfall configuration, aligned to the stern gates equipped with hydraulic closers and guiding pics, a 71-tonne topline winch and a 57-tonne tail-end winch, as well as mooring winches, an anchor windlass, a netsounder winch on the aft gallows and two sets each of hydraulic and fish hose reels for the SeaQuest fish pumps. A net bin on the starboard side is recessed into the shelterdeck.

The deck cranes are from MacGregor Triplex, with a KN-60 fore deck crane, an NK-6000 net crane aft and a KNR-75 fish pump/general purpose crane mounted on the aft gantry with a deployment area over the trawl deck and aft of the stern.

The Furuno Smart Bridge puts a row of five 55-inch Olorin monitors facing the skipper’s control position and there are a further fifteen 27-inch Hatteland monitors dotted around the wheelhouse.

When the winches demand full power, there’s less demand from propulsion. So the gearbox PTO is clutched in while the winch system is in use, with power routed from the shaft alternator to give the deck all the power it needs. Once the gear is back in the water and Artemis is towing, the PTO can be clutched out, power routed to the shaft from the main engine and electrical power to the systems on board comes from one of the two gensets.

The gensets are able to connect into main switchboard, controlled by the vessel’s DEIF power management system. The electrical power system is designed for sliding frequency (60-50Hz), by means of frequency converters for 400/440V and rotating frequency converter for 230V. This allows main engine and propeller revs to be 17% lower than would otherwise be possible.