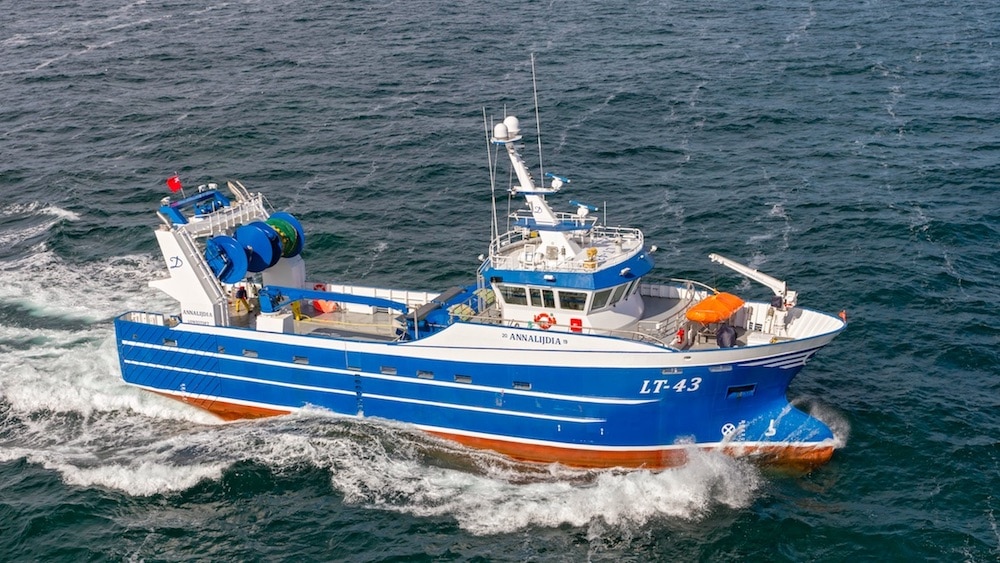 The latest trawler to emerge from a Dutch shipyard hasn’t had an easy ride, but after setbacks that could have been disastrous, the new twin-rigger/seine netter has been handed over to its Katwijk owners.

Built at TB Shipyards in Harlingen for Maarten van Duijn and his son Klaas, the Lowestoft-registered Annalijdia LT-43 suffered two fires on board during construction, the second of these taking place as the vessel was close to completion and extensively damaging the fishroom and catch handling area – and for a while the new vessel’s future was in doubt.
The decision was taken to press ahead and the completed Annalijdia is a Vestværft design, with a 37.51 metres overall length and a beam of 8.70 metres. TB Shipyards acted as the main contractor responsible for co-ordinating sub-contractors and delivering the completed vessel.
This is one of the latest generation of fishing vessels capable of alternating stern trawling and fly-shooting, using electrical winch systems that are becoming increasingly popular, with several such systems about to be delivered to newbuilds under construction at Dutch and Spanish yards.
VCU’s TCD technical division developed Annalijdia’s Ósey Urk winch systems. Dutch fly-shooters have traditionally used hydraulic deck equipment, as these make fast shooting of seine rope practical while also providing the high torque needed for hauling.
When requests started to come in for electric winches, TCD was presented with the challenge of coming up with a solution and found the answer with local company Dromec, which has a background in building small electric winches and capstans, and which has built up a strong reputation in dredging and offshore sectors as its product line has expanded.

Annalijdia is the first of this new generation and is undoubtedly going to be under the spotlight as it starts fishing – with both the deck equipment supplier and other fishing companies paying close attention to its performance.
‘We were very keen for them to test the fly-shooting system on the fishing trials and we had both our people and staff from Dromec on board to test the winches,’ VCU’s Lourens de Boer said.
‘The trials all went well, especially showing that we can maintain a constant tension on the ropes during shooting and hauling.’
TCD delivered a pair of winches capable of holding 3700 metres of 50mm seine rope, which can also be used for twin-rigging with Dyneema warp, plus a centrally mounted middle wire winch with capacity for 750 metres of 26mm wire, and which is also prepared for Dyneema warp.
The package also includes twin 12m3 net drums built into the aft gantry, with Dromec supplying the drives and control systems.
‘An important feature of the electric winch control is that shooting is at a controlled high speed
and tension, and the drum is not clutched out of the motor,’ Lourens de Boer said, commenting that the control system incorporates automatic wire spooling, automatic shooting with tension control, automatic hauling at equal speed and tension and programmed hauling speeds.
The trawl mode includes integration of data from the door sensors, automatic overload detection and protection, and a turning mode as part of a suite of features that includes synchronised control and auto-trawling.
VCU’s net loft in Urk supplied Annalijdia’s trawl gear, with three 60 metre footrope, 48 metre headline trawls for twin-rigging, plus compete sets of sweeps, deck rigging in Dyneema and steel wire for handling the doors and clump, and 750 metres of 26mm warp for the middle wire.
VCU SafetyCentre supplied a complete safety equipment package of life rafts, lifejackets with integral AIS PLB’s, pyrotechnics, firefighting equipment, medical supplies and navigation documentation.

Annalijdia’s catch handling system is supplied by VCU’s technical division TCD, and this is designed to be able to handle flatfish catches in significant quantities as promptly as possible during the summer, while also having capacity to handle smaller catches of a greater variety of species while fly-shooting in the winter months.
VCU’s designers developed the layout with reception facilities for both quantity and variety during the sorting process, with a rotary washer system. Once the client had approved the design and layout, the catch handling system was constructed at TCD’s stainless steel workshops in Urk, and then installed and commissioned at TB Shipyards in Harlingen.
The setup includes VCU’s catch management system in the fishroom, where fish are weighed and each box registered, with the data shared with the VCU CatchManagement software in Annalijdia’s wheelhouse.
VCU’s refrigeration engineers fitted the fishroom cooling system and VCU also supplied and fitted one seawater flake ice maker and a slurry ice machine.