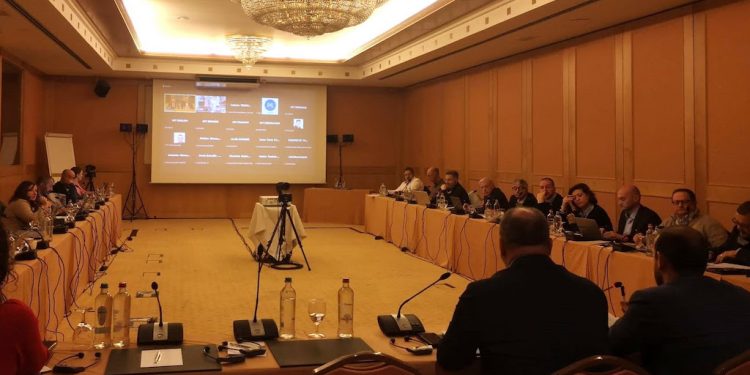 Last week’s plenary of the European Social Dialogue Committee for sea fisheries was attended by commissioner for environment, oceans and fisheries Virginijus Sinkevičius, during which social partners ETF and Europeche engaged in a constructive dialogue with the Commissioner about the social dimension of the CFP.

Fishing sector representatives want to see the Commission seriously take into account the fact that fish workers and the livelihood of their families very much depend on the decisions taken in Brussels. Yet, despite the fact that more and more stocks are fished at sustainable levels, the EU fleet and its fishers are disappearing year after year.

During the meeting, the Commissioner reiterated his commitment to make fisheries sustainable in Europe, zero tolerance towards IUU fishing, tackle pollution, preserve the biodiversity and also the profitability of the fisheries sector.

The social Partners welcomed these objectives to decarbonise and modernise the sector without increasing capacity. He stressed that the intention of the Commission is not to revise the CFP but to implement policies better for the sake of stability and predictability for the sector.

‘We are 100% in favour of sustainable fisheries and we support the Commission in its zero tolerance against illegal fishing. However, the CFP must be based on three pillars – environmental, social and economic sustainability – that should be treated on an equal footing. That is why the Commission shall always do a thoughtful and proper socio-economic impact assessment before taking any preservation measure and, if necessary, shape the policies taking into account the outcome of such potential negative socio-economic consequences. What we observe is that the sector and the workers are dramatically impacted by the decisions taken by the Commission disproportionately closing areas to fishing, proposing to include perfectly regulated species in CITES and proposing fishing activity reductions in areas like the Mediterranean to the point that is sentencing the sector to disappear. The voice of fishermen is not sufficiently heard.’

‘For that reason, it should cherish its fishers and protect their lives and livelihood. There is a lot to gain in that respect. I hope the Commissioner listened and act upon, despite not recognising these issues afterwards on a message published on twitter,’ he said.

‘The Commission often talks about the protection of fish but little about the protection of fishers. In fact, the CFP is increasingly linked to environmental legislation1 and poorly linked to social and safety objectives. To attract new generations to our sector we need the EU to adopt fisheries policies that provide legal security, stability and enhance the competitiveness of fisheries enterprises. Until we reach that point, we will be unable to make this job attractive.’

The Social Partners welcome the Commissioner’s open dialogue with the EU Social Dialogue Committee for Sea Fisheries and recognition of its unique role in addressing the social dimension of the CFP.