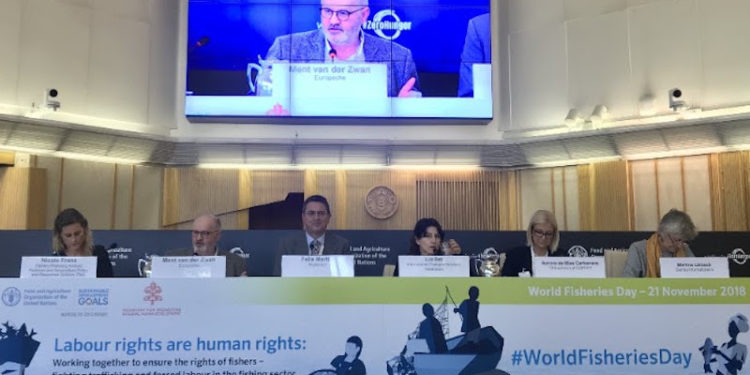 On the occasion of the World Fisheries Day, the FAO and the Holy See again joined forces to host a successful event focusing international attention on the fair treatment and well-being of fishing people around the world.

Europêche, on behalf of the EU fishing industry, participated together with international organisations, government representatives, trade unions and relevant stakeholders in this year’s event titled Labour rights are human rights: working together to ensure the rights of fishers – fighting trafficking and forced labour in the fishing sector.

United Nations specialised agencies in fisheries and their member states were urged to work together to promote the ratification, implementation and enforcement of internationally agreed social standards to support the livelihoods of the world’s 38 million fishermen.

High-ranked panellists provided advice on how to overcome obstacles and shortcomings to better protect fishers and fight against IUU fishing, which is widely associated with offences involving the safety and welfare of crews. ‘Behind every economic activity there is a human being,’ they stated

‘We are resolved to continue the momentum initiated by the FAO and the Holy See in Rome to strengthen social sustainability across fishery value chains,’ said Ment van der Zwan, Europêche spokesman on social affairs, and one of the key speakers today.

‘Labour rights are human rights; it is not just a slogan. It’s something we must all recognize, prioritise and respect. Labour abuse undermines workers and employers that are competing under fair conditions and respecting legality. Meeting human needs and labour standards are fundamental for a socially responsible fishing industry and fisheries policies,’ he said.

‘We need to move from words to deeds. As industry, we are taking matters seriously since as a result of the legislative action of the European social partners in the fisheries sector, the ILO Work in Fishing Convention was transposed into EU law, which entered into forced exactly one year ago. Similarly, we are now working to transpose the STCW-F Convention into Community legislation to bring greater safety at sea and planning to produce international guidelines on medical examination and recruitment of migrant fishers.’

The panel concluded that despite major progress in environmental sustainability, insufficient attention has been given by nations to the implementation and enforcement of essential principles of international law for the protection of fishermen, making fishing still a hazardous activity.

In particular, these are the ILO Work in Fishing Convention, C188 (manning and labour conditions), IMO Cape Town Agreement 2012 (safe construction), STCWR08;F Convention (safety training) and FAO Code of Conduct for Responsible Fisheries and Agreement on Port State Measures (responsible fishing), which are the foundations for the protection of fishermen across the world.

According to the speakers at the event, these Conventions are either not in force or poorly ratified by the international community. These instruments, if ratified, fully implemented and enforced by all States, could significantly improve the life of fish workers, their families and the environmental status of fisheries resources.