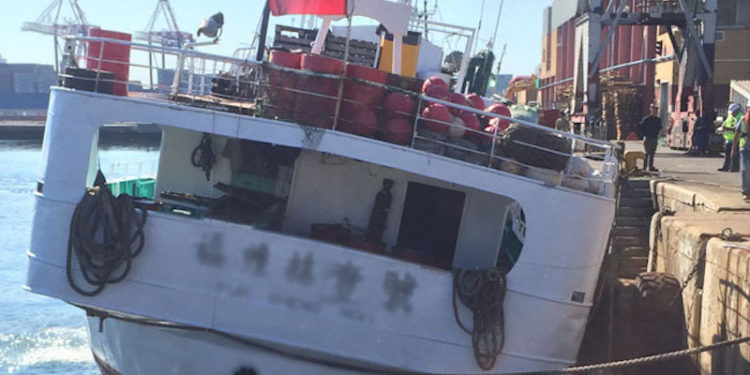 A first vessel detention has taken place under the International Labour Organisation Work in Fishing Convention that came into force last year. The 380gt vessel was detained in Cape Town following inspections and complaints made by the crew.

A long list of problems were identified by two inspectors from the South African Maritime Safety Authority (SAMSA), Thelma Paul and Pieter-Chris Blom. The shortcomings included a lack of documentation, poor accommodation, insufficient food for crew, and poor safety and health conditions on board.

‘Only two of the crew members had work agreements and there was not even a crew list,’ explained Thelma Paul. ‘The lifebuoys were to be replaced because they were rotten, the anchors were not operational and one was even missing. Health and safety conditions were generally very poor.’

Crew members complained about harsh working conditions, including having to engage in heavy manual handling of fish on deck and to the fishroom. Some crew members said they wanted to leave the vessel.

The inspectors voiced particular concerns about the vessel’s stability and following the initial inspection it was evacuated and declared unseaworthy. It was released from detention once it had been stabilised, repaired and the other issues addressed. The owner of the vessel also paid a detention fee of R 12,365 (about €800).

While the primary responsibility for compliance rests with the fishing vessel owner and the flag state, port state control inspections check that fishing crews have decent working conditions and help protect owners who provide such conditions from unfair competition by those who do not.

‘The action by South Africa demonstrates that Convention No. 188 can be used as a tool to address problems of mistreatment of fishers that occurs on many fishing vessels and in many fisheries,’ said Brandt Wagner, an ILO official concerned with conditions of work in shipping and fishing.

‘The Convention’s influence and effectiveness will grow as more states ratify and implement it as a part of their efforts to achieve true sustainability of fisheries. Widespread implementation of Convention No. 188 will, over time, make it increasingly difficult to mistreat crews, a concern of all who harvest, sell and consume fish.’

SAMSA inspector Thelma Paul agreed that C188 is both useful for their daily work and has educational value.