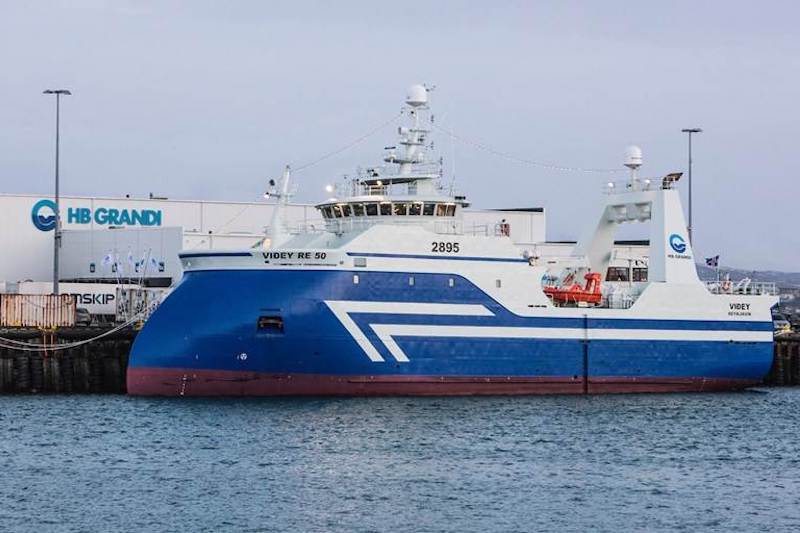 ‘We can safely say that everything has gone like clockwork since we took delivery of the ship. The trial strips went well and it didn’t take long for everything to be working as it should. We’ve had two trips to the Westfjords fishing grounds and we had practically a full fishroom each time,’ said Jóhannes Ellert Eiríksson, known to everyone simply as Elli, skipper of HB Grandi’s new trawler Viðey.

Viðey was delivered and arrived in Iceland in December, after which it was steamed to Akranes for the catch handling deck and the unmanned fishroom to be installed. That was completed before the Seamen’s Day holiday at the beginning of June.

‘We’re still learning about the technical and computer equipment, but all this has exceeded our expectations,’ he said, clearly thoroughly satisfied with the new ship.

‘In fact, I can’t be dissatisfied with leaving Ottó N Thorláksson for the new trawler. Ottó was a fine ship, but had its limits. Here on Viðey you’re hardly aware of any movement. Noise levels are ideal. Once you’re in your bunk you can hardly hear a thing when the gear is hauled and the sound of the gear on the deck doesn’t reach the accommodation. Sometimes on board Ottó the noise could be so loud that you couldn’t hold a conversation, but that’s all in the past now. There’s nothing more to say about the crew facilities – everything is first class,’ he said.

He has long experience of working with Bacalao trawls, and Viðey has two of these on board. Trawl doors are from Thyborøn and are around four tonnes each.