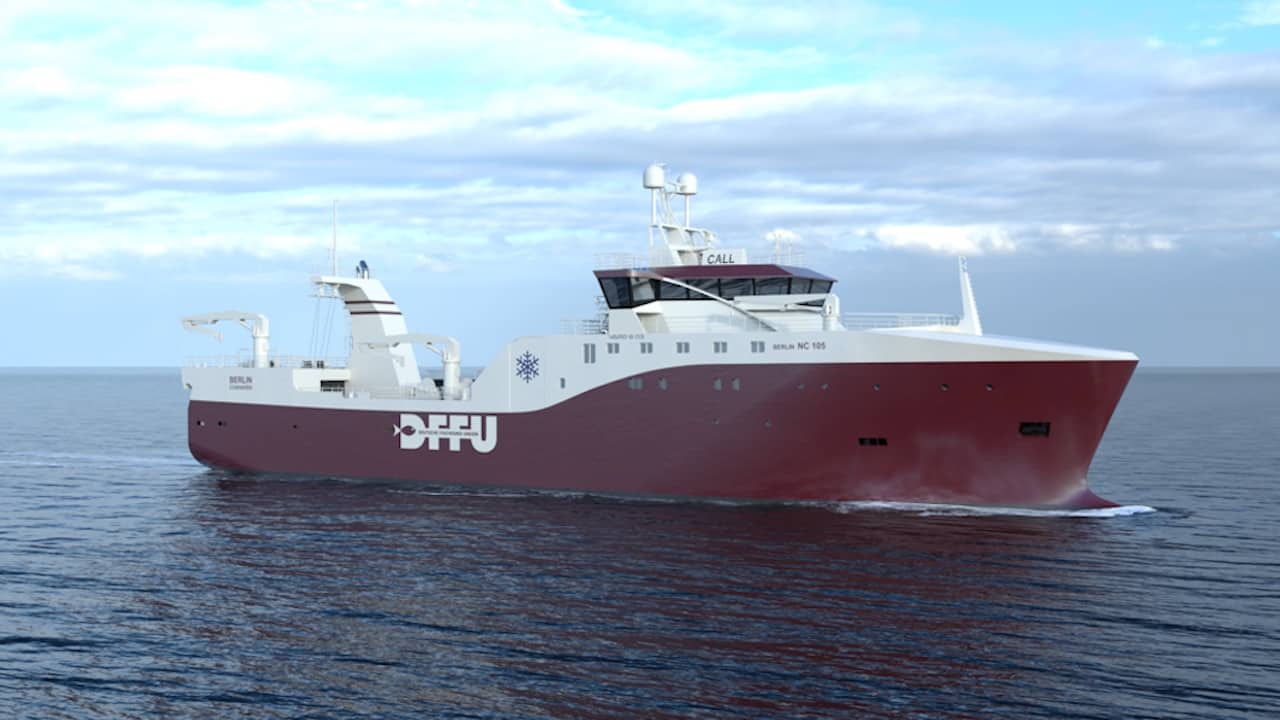 Norwegian shipbuilder Vard has signed a contract worth over NoK500 million to build an 84 metre LOA, 16.60 metre beam freezer trawler for Deutsche Fischfang-Union.

The Vard 8 03 vessel’s design has been developed by Vard Design in Ålesund, the hull will be delivered in early 2024 by the Vard Braila yard in Romania for outfitting at Vard Brattvaag in Norway, with completion scheduled for later that same year.

The new DFFU vessel will be outfitted as a triple-rigger with Seaonics deck equipment. Carrying capacity extends to 2200 cubic metres of refrigerated fishroom space over two decks, plus a 540 cubic metre ensilage capacity.

The Vard catch handling system with a live fish tank to keep the fish in peak condition prior to processing is a key feature of the factory deck, which is designed for full utilisation of biomass.

‘We are very pleased to have reached an agreement with Vard to design and construct a new trawler for DFFU. This new vessel will allow us to bring 100 % of the catch to shore, enabling the utilisation of the whole catch for increased value creation. The new vessel will have exceptional crew facilities and will be equipped with the most advanced technology available in our industry,’ stated DFFU’s directors Baldvin Thorsteinsson and Samuel Ortega.

‘This contract proves our value chain’s competitiveness and will provide activity at several entities within Vard’s network of specialised facilities. Building fishing vessels and trawlers are an essential part of Vard’s history and core business, and the new assignment will utilise and develop our broad knowledge and competence within the field.’

As part of the overall build, Vard Electro will provide a complete SeaQ package, encompassing advanced, highly intuitive bridge, power, and automation systems. The SeaQ Integrated Bridge is a flexible and modern bridge that integrates the maritime systems, focusing on optimisation of the operator’s workstation allowing storing of own preferred setup, reducing workload, and simplifying operation and safety.

The SeaQ package will include SeaQ Micro Grid, SeaQ Energy Storage System, SeaQ Power Management System, SeaQ Integrated Automation System, and SeaQ Green Pilot. With these combined, the vessel operator is given a full performance overview and can easily manage their operations with the aim of power optimisation for reduced emissions.