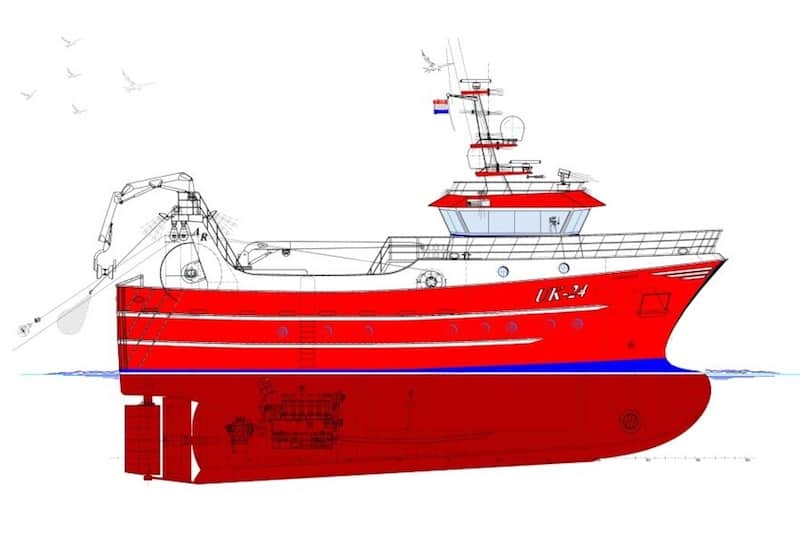 A new twin-rig trawler has been ordered from the Hoekman yard by Urk owners, and is to be built to a design by Scheepsbouw Bureau Herman Jansen, with a delivery date in mid-2020.

Urk fisherman Albert Romkes has gone to Hoekman Shipbuilding for the new Zuiderkruis UK-24, a 27.75 metre LOA, 8 metre beam dedicated twin-rigger, and the design comes from Scheepsbouw Bureau Herman Jansen, a company with a very design long track record and which is responsible for designing much of the Dutch fishing fleet over the last few decades.

The new UK-24 is an entirely new design and features an enclosed shelterdeck. Construction work on the steelwork is expected to commence early next year in Poland and the partly outfitted hull will be brought to Hoekman Shipbuilding’s quayside in Urk for fitting out and completion.

The design incorporates an 800p ABC main engine powering a 3000mm diameter propeller, and optimised fuel consumption is a key feature of the UK-24’s design.

The newbuild replaces Albert Romkes’s previous 29 metre UK-24, which was built in 1969 and which was sold last year, now fishing as Kleine Jan UK-242.

With Hoekman Shipbuilding as the main contractor, a number of other Urk companies have already been lined up as suppliers for the new trawler, including Piet Brouwer Elektrotechniek to fit the electrical installation on board, L. Post & Zonen to handle the carpentry work and VCU to supply design and manufacture the catch handling system.