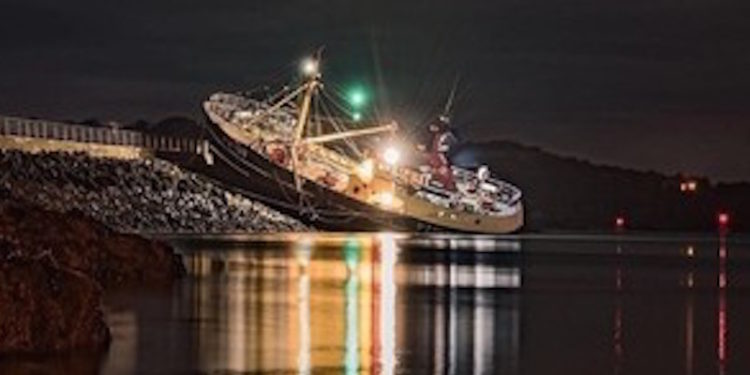 A fisherman with over 40 years experience has been sentenced to four months in prison, suspended for two years after pleading guilty to offences under the Merchant Shipping Act.

Algrie’s skipper, Michael Kinnaird, had earlier pleaded guilty to the charges at Plymouth magistrates court on 6th December, which related to an incident on October. It was shortly after 8.45pm on 7th October 2017, that Algrie left Sutton Harbour. It then continued out of the harbour entrance but did not alter course into the shipping channel.

Instead, Algrie maintained a steady course at seven knots before running aground at Mountbatten Breakwater. None of the five crew on board was injured and there was no reported pollution as a result. Minor damage was caused to the vessel and it was recovered on the next high tide.

When interviewed by MCA Enforcement Officers, Mr Kinnaird said he had navigated into and out of the harbour hundreds of times, but on this occasion, became confused when he saw lights from anglers who were fishing from the breakwater. He was asked why he didn’t reduce his speed or go astern, use his navigation aids or even his spot light but he could give no answer.

He has been was sentenced to a total of four months imprisonment, suspended for two years. He was also ordered to pay costs of £5000 and £115 victim surcharge.

In passing sentence, District Judge Taylor said that alcohol did affect Mr Kinnaird’s actions that night and he didn’t accept his explanation about being confused by the lights on the breakwater.

‘Preparing a comprehensive passage plan and maintaining a safe and proper navigational watch at all times, by use of all available means, is of paramount importance in order to prevent incidents such as this from occurring,’ said Ian Blair, technical manager at the Maritime & Coastguard Agency’s Plymouth marine office.