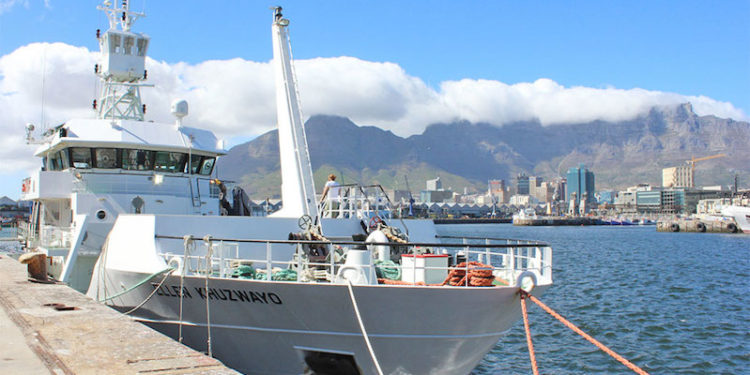 A South African research vessel sailed from Cape Town last month on the fifth and final leg of an innovative five-year experiment that is expected to shed light on the contentious subject of trawling and the impact it has on the seabed.

According to the South African Deep-Sea Trawling Industry Association (SADSTIA), although bottom trawlers are responsible for landing at least 20% of global marine fish catches and play an essential role in food security, trawling has been criticised for inflicting irreversible damage on benthic ecosystems.

The surveys conducted on board research vessel Ellen Khuzwayo over the past five years are expected to provide a scientific view on this issue, particularly as it relates to the South African deep-sea trawling industry, South Africa’s most important commercial fishery.

Deep-sea trawlers target hake on trawl grounds that extend from the Namibian border on the west coast to the extreme eastern part of the Agulhas Bank near Port Elizabeth. Fishing takes place at depths of between 200 and 800m and it is estimated that trawling occurs in an area equivalent to 4.4% of South Africa’s exclusive economic zone.

The regularly trawled grounds of Karbonkel, located off the coast of the Northern Cape, with an average depth of 400m, were selected for the five-year Benthic Trawl Experiment (BTE) which is being implemented collaboratively by a number of partners, including SADSTIA, the Department of Agriculture, Forestry and Fisheries (DAFF) which provides Ellen Khuzwayo, the University of Cape Town (UCT), the South African Environmental Observation Network (SAEON) and the National Biodiversity Institute (SANBI).

As chief scientist on the Ellen Khuzwayo, associate professor Colin Attwood of UCT explains that for the purposes of the BTE, the Karbonkel grounds were divided into five clearly defined trawl lanes.

The researchers are using a sophisticated underwater camera to collect images of the seabed, and at pre-determined locations the crew of Ellen Khuzwayo has deployed a simple underwater grab that has collected samples of the animals living on or in seabed sediments. A curious collection of crabs, anemones, urchins, brittle stars and worms has been extracted from the sediments of Karbonkel.

As soon as Ellen Khuzwayo returns to Cape Town, an intensive analysis of five years of data will begin and the team expects that in two to three months time it will have the information it needs to definitively say, for the first time, what the impacts of trawling are in South Africa.

‘The outcome of the experiment is expected to address critical gaps in knowledge of the long-term effects of trawling and the capacity of deep-sea habitats to recover from such impacts,’ said SADSTIA secretary Dr Johann Augustyn.

Although the BTE is the first experiment of its kind in South Africa, similar experiments have been conducted in other parts of the world and SADSTIA has participated in a ground-breaking international initiative to determine the global impacts of trawling. This study was conducted by a team of 16 researchers who analysed data from trawl fisheries around the globe.

They published their results in Proceedings of the National Academy of Sciences in July last year and determined that the impacts of trawling are highly variable; recovery times for plants and animals disturbed by trawling depend on the type of gear used and a range of environmental variables.

The South African trawl fishery for hake is certified as sustainable by the Marine Stewardship Council (MSC) the world’s leading certification and eco-labelling programme for sustainable, wild-caught seafood. Improving knowledge and understanding of the impacts of trawling on the benthic environment is one of the conditions of MSC certification.