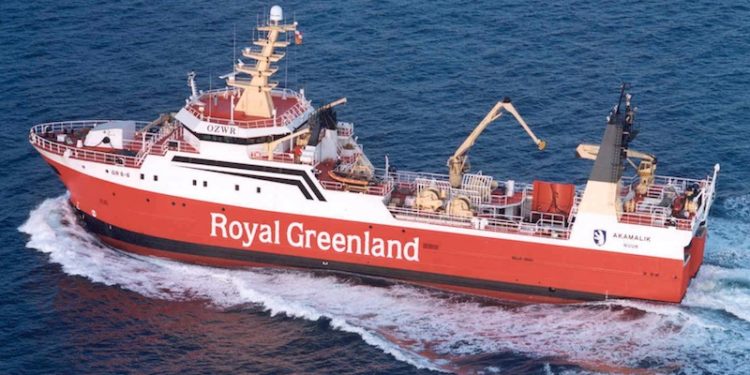 Greenlandic shrimp trawler Akamalik tows a pair of Vónin 2014 shrimp trawls spread with a pair of the new Storm trawl doors from the same company and skipper Jógvan Tróndarson reports that he is satisfied with the way the gear performs.

‘We have been using the new Storm trawl doors, and we were involved in the development of these from the outset. They have turned out to be strong doors, and perform well,’ he said.

‘Linjohn, Akamalik’s other skipper, got them changed, with some more attachment points further forward on the back of the doors. We have seen that once these modifications were made they only got better. They easily lift from the bottom, don’t collapse on their back, have a good spread and arrive very neatly at the stern when hauling. They are good to shoot and I can just say that we are very happy with these doors. We have not had any problems even though we have caught some pretty bad fasteners.’

As well as the Storm doors that Akamalik has been using, they also took delivery of new trawls in July this year, this time going for trawls with three wing tips that have fished successfully.

‘They fish well and open well on the bottom. After two months there are no bobbin holes in the netting and we have not damaged the trawls at all, and have not needed to use the spare trawl,’ Jógvan Tróndarson reported.

‘We have been using the same two trawls all the time while the spare trawl just has been laying there in its trawl lane. We have been on different types of ground, though the fishing has been mostly on good ground. I have to say that seeing so little abrasion on the trawls is really impressive, and that’s something I would like to highlight,’ he said.

‘With these trawls and trawl doors, Vónin has gone a step further in the right direction and we appreciate that.’