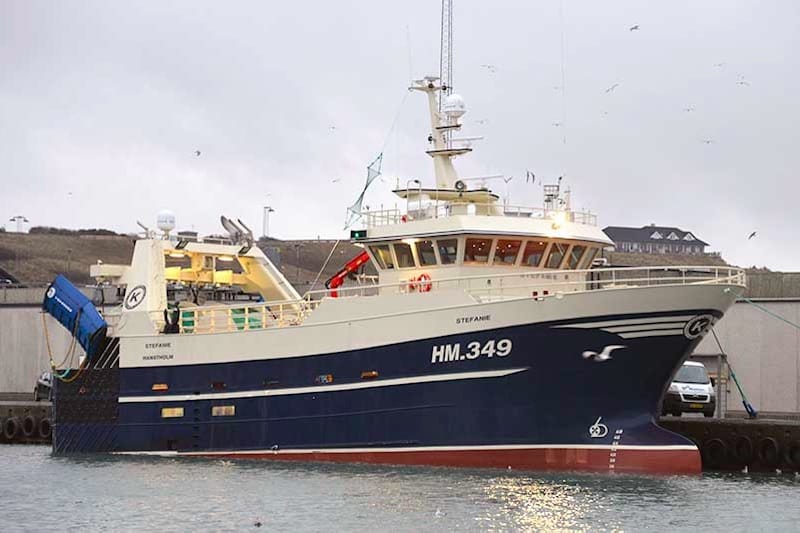 The latest addition to the Danish fleet completed a quick test trip to test its gear before docking in Hanstholm a few days before Christmas for an open day on board and a reception held in one of the auction halls, and skipper Brian Bloch Larsen was hoping to get in a trip before New Year when we caught up with him.

The new Stefanie HM-349 is the latest addition to the fleet owned by Henning Kjeldsen and was fitted out by Kinde og Toft in Thyborøn. The 32.12 metre seine netter/twin rigger has a beam of 9 metres and is designed to be able to switch between fishing methods in a few minutes.

‘We had no problems at all, everything worked as it should,’ Brian Bloch Larsen said. ‘We had some good fishing and tested the twin rig gear. The boat is fitted so we can switch from twin trawl to seine net in five minutes, and we’re looking forward to trying that out. Even when you have a skilled and experienced crew, you still need to learn the right routines. But it has been a successful first trip and it looks good for the future,’ he said.

Stefanie is fitted with a sophisticated catch handling deck supplied by VCU in Holland for sorting, gutting, washing and weighing the catch, which incorporates a Jansen Teknik F80 gutting machine for plaice.

Brian Bloch Larsen started working with Henning Kjeldsen in 2015 as skipper of Myggines, trawling for sandeel and later seine netting, before switching to skipper the Vestfart. He came ashore in October to concentrate entirely on getting the new Stefanie completed and ready for sea.