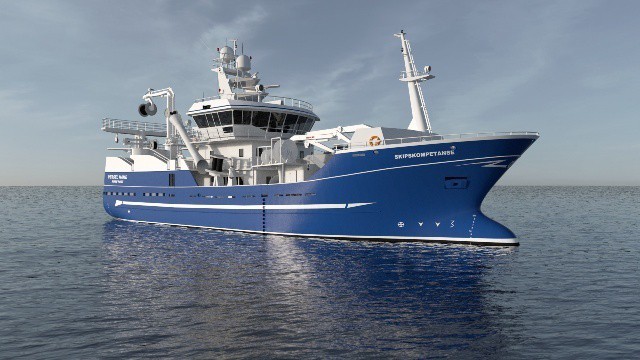 Construction is now in progress of six new multi-purpose fishing vessels at the Yantar Shipyard in Kaliningrad for a customer in the Russian Far East.

A steel-cutting ceremony was held last week to begin construction, attended representatives of the yard and the customer, with the first plates cut to mark the beginning of the build process.

The series of 50.06 metre by 12 metre beam vessels, each with an 800 cubic metre RSW capacity, are being built to Norwegian naval architect Skipskompetanse’s SK-3101R design. The new vessels are being built with 2200kW main engines and will carry a crew of up to 15. They are designed to be able to alternate demersal and pelagic trawling, purse seining and fly-shooting.

The first of the series of due to be delivered in June 2017, with the series expected to be complete the following year.

The customer, the VI Lenin Fishing Collective Farm based in the Petropavlovsk-Kamchatka region of Russia, the Yantar yard and Skipskompetanse are reported to have agreed on options for further vessels if required.

‘This is for us the most important event of the last 20 years,’ said Vladimir Kryukov, assistant chairman at the VI Lenin Fishing Collective Farm.

‘This long-term collaboration with Yantar Shipyard and Skipskompetanse in Norway has made possible construction of ships with advanced storage technology capable of keeping catches fresh for seven days. These will be the first of their kind built in Russia for a Russian enterprise. The construction of there fishing vessels at the Yantar shipyard is the beginning of a new stage in the development of the Russian fishing fleet,’ he said.