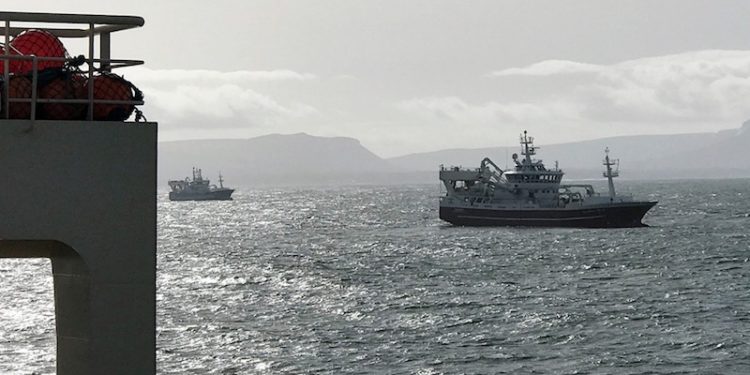 Sitting out the storm in Donegal Bay

A group of pelagic vessels has been sheltering in Donegal Bay while a storm has been raging on the blue whiting grounds west of Ireland.

According to Théodór Thórðarson, skipper of HB Grandi’s Venus, the forecast is poor, with no indication that the weather will improve before Friday.

‘There has been bad weather and there was a storm on the grounds when we arrived. In spite of that, we managed one decent haul, 440 tonnes, but the next haul was a lot less. After the weather worsened there was nothing for it but to seek shelter and we reached the bay yesterday. Initially we were going to dock in Killybegs, but as the harbour was full we’re here in the bay. In fact, anything else was out of the question as the seas are very heavy out there and two of the Icelandic vessels have suffered damage,’ he said.

Börkur’s skipper Halfdán Halfdánarson said that they had also taken two hauls before having to seek shelter.

‘Now we’re here in Donegal Bay, with Beitir, Sigurður, Víkingur, Venus one Faroese vessel and one from Norway. Aðalsteinn Jónsson is on the way, so there’s some traffic here, while Killybegs harbour is packed with Norwegians,’ he said.

‘There’s no outlook for fishing weather for the next few days, so the time goes into cleaning and maintenance. There’s always enough that needs to be done.’

This time the fishing some way further north than where the Icelandic vessels had been to begin with. The fish spawn south and west of Ireland before heading north to look for feed.

‘We don’t know a great deal about blue whiting’s behaviour at this time of year as we have normally been fishing capelin in February and into March,’ Theódór Thórðarson said.

‘After that we have been on blue whiting and the last two years the fishing has been all over west of Ireland by the 18th to 20th of March. We hope it won’t be that way this year and we should be back on fishing grounds on Thursday night or on Friday.’