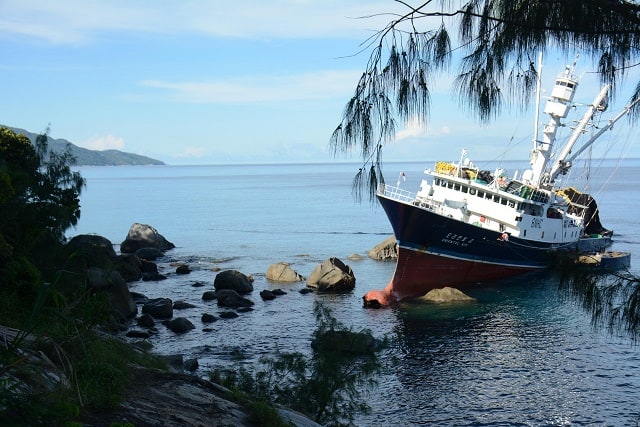 An operation is in progress to salvage a Korean purse seiner in the Seychelles. The vessel was on passage to Port Victoria when it grounded at L’ilot, Glacis, on the northern coast of Mahé, the largest island of the Seychelles group.

Oriental Kim has 700 tonnes of frozen tuna on board, as well as 250 tonnes of fuel, and a minor oil spill has already been observed, which salvage teams are attempting to contain with booms before the remaining fuel on board is pumped out.

Salvaging the vessel is a significant operation and according to Seychelles News Agency reports, the bow of Oriental Kim needs to be patched before it can be floated and there is a possibility that larger tugs may need to be brought in if the Port Authority’s own tugs are not powerful enough to pull the seiner from where its bow is on the rocks.

An investigation will be carried out into what caused Oriental Kim to run aground. The seiner was carrying a crew of 25, ten or whom remain on board as the salvage plans progress.