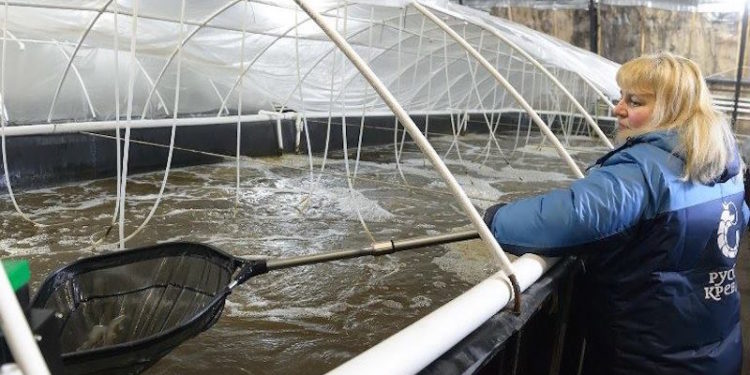 Foto / Video: Press Service of the Government of the Kaluga Region

The largest Russian farm for breeding white Pacific ‘Russian’ shrimp has opened in the village of Kollontai in the Kaluga region south-west of Moscow. Pacific white shrimp are traditionally called ‘royal’ for their size and delicate taste. LLC Russian Shrimp is the only producer of natural Pacific (royal) shrimp in the country, using broodstock imported from Brazil, Indonesia and the US.

Russian Shrimp was created to provide an alternative to imported frozen shrimp. The investment in the venture amounts to approximately 100 million rubles (€1.45 million). The enterprise was launched at the end of March 2016, initially in test mode, and today supplies products to Moscow and local restaurants, hotels and cafes.

Since the establishment of the farm it has produced 20 tonnes of shrimp and the plans are to increase production significantly in 2018 to 30-35 tonnes of shrimp per year. When it reaches full capacity, production is expected to hit 200 tonnes annually.

The farm has 8000 square metres of salt water ponds under cover and an incubator unit capable of raising 30,000 shrimp at a time. The juvenile spend 40 days under ‘hothouse’ conditions before being released into pool, all completed under a highly automated system

The company creates twelve new jobs, which is set to increase along with production levels, and future plans are for other shrimp farming ventures to be established in other Russian regions.

‘The development of aquaculture is one of our priorities, we need to increase both volumes and diversity. The opening of such advanced production facilities will allow us in the near future to replace imported products,’ Vasily Sokolov said.

‘It is especially important that this is a high-tech production, whose products are in demand on the domestic market. The transition from extensive and inefficient cultivation of fish and invertebrates to modern breeding methods is one of the key tasks set by the Strategy for the Development of the Fisheries Complex until 2030.’