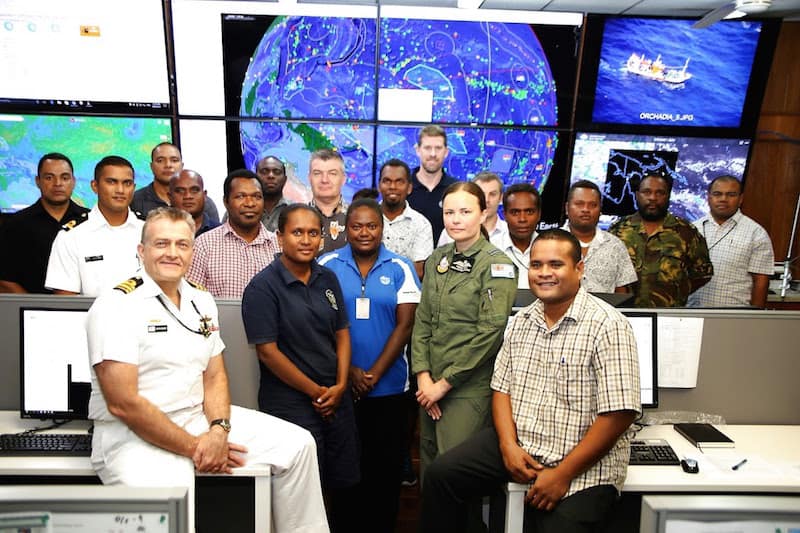 Blue boats have been spotted in the PNG EEZ, with boats fishing without a working Vessel Monitoring System and illegal shark fishing are amongst the license breaches picked up in the just-ended Operation Rai Balang surveillance sweep for 2017.

Led by nine Pacific nations and coordinated out of the Forum Fisheries Agency (FFA) Regional Fisheries Surveillance Centre, the ten-day Rai Balang surveillance operation covered 14.70 million square kilometres and netted a total of 918 detections of fisheries vessels, 93 aircraft sightings, and 50 boardings, including 30 at sea. Seven apprehensions were recorded, five of them from Vanuatu, with longliners flagged to China with minor infringements. In FSM, a purse seiner flagged to China was allegedly not operating its VMS at the time of its inspection, and in Solomon Islands, a longliner flagged to Chinese Taipei is facing illegal shark fishing fines because it was allegedly using fishing gear commonly seen in shark capture and finning offences.

‘The news of another successfully completed surveillance operation always comes with appreciation to the many individual parts that make a coordinated action like this come together—all participating nations are to be congratulated for their efforts,’ said FFA Deputy Director General Wez Norris.

‘Each of these seven cases will now be pursued by the relevant FFA members and however they are resolved, Pacific nations are ensuring that those fishing in their waters are complying with the rules, or facing the consequences. This continues the deterrent message of operations like Rai Balang – fish by the rules, or pay the price.’

Working with the nine nations, the aerial and maritime defence assets of the QUADS (Australia, New Zealand, France and the US) helped to ensure a record and broader coordination of activities, which again as in 2016 featured Vietnamese blue boats. Three Vietnamese blue boats were chased out of the Papua New Guinea EEZ by HMPNGS Moresby. Four days later, there were two separate sightings — one group less than 100nm South West of Port Moresby; and another group in the vicinity of Lyra Reef, 130 nautical miles North East of Rabaul.

‘The Vietnamese Blue Boats have been earmarked in recent operations as an issue of rising concern, particularly for FSM, Palau, Papua New Guinea and Australia,’ said DDG Norris. ‘They are basically pirates of the reef systems they pillage and that makes them a rising concern to food and environmental security, as well as posing numerous other law enforcement risks.  Our Fisheries ministers are keen to see some strategic, effective Pacific responses which can put a stop to this criminal activity.’

For the first time in any FFA surveillance operation, Rai Balang 2017 air surveillance sorties supporting the primary mission recording activity in the oceanic tuna fishery had a new secondary task of searching for and reporting any Vietnamese blue boats in their assigned patrol area.

Participating Rai Balang nations in 2017 Fiji, FSM, Kiribati, Nauru, Palau, PNG, RMI, Solomon Islands and Vanuatu initially deployed nine Pacific Patrol boats providing a total of 69 days at sea. The patrol boats and Maritime HQ’s across the operation were supported by five QUAD (Australia, France, NZ and US) aircraft which flew 20 missions totalling 119 hours. The French also provided a patrol boat which operated in the waters between Vanuatu and Fiji.

‘These surveillance operations provide a unique opportunity to take capacity building to the next level, and I am certain our Rai Balang Chief of Staff will have a renewed sense of how his work in Fisheries Law Compliance in Palau now feeds into the work of regional fisheries surveillance connecting our nations to increase the limited reach that they each have in their own right into a single regional effort with enormous coverage,’ said DDG Norris.

‘This resource sharing, communication, and interdependent roles plugging into a unified regional surveillance picture with its own data layers, makes each operation an effective contact and training network—beyond its key purpose of watching over the regional fishery. In short, each surveillance operation reaps benefits far beyond the results we are reporting today.’

One hook, one line, one fish at a time

Poaching down in Australian waters, and latest arrest escorted to Darwin