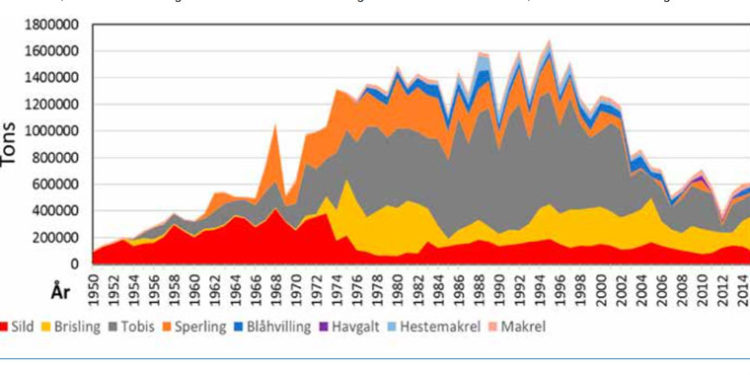 The sea is full of fish that may not be caught, according to FF Skagen CEO Johannes Palsson, commenting on the reduction in catches of industrial species for protein production.

‘It is a paradox, especially when it can be shown that fishing of these does not threaten fish stocks. Yet quotas for protein fisheries have been reduced by up to 50% in the last 25 to 30 years,’ he said.

‘Fishing opportunities in this fishery are under-utilised, due to failed biological advice and an EU bureaucracy that blocks innovation and development.’

Protein fishing constitutes about 20% of all Danish fisheries. With an export value of about DKK3.50 billion annually, Denmark is the EU’s leading producer, with no less than 80 to 90% protein-rich fish products. Denmark is also the world’s fourth largest producer of fish oil and the 7th largest fishmeal producer.

‘Our business, FF Skagen, is owned by fishermen and the fishing industry is experiencing several paradoxes in administration. One of them is that fish oil produced in Denmark may not be used for human consumption, whereas fish oil imported from non-EU countries such as Iceland, Norway and Peru can be marketed and sold in Denmark,’ he said.

‘Production in Denmark is documented as sustainable and traceable to a high level. This is examined and approved every year by independent bodies to award international certificates as documentation for the standards met.’

He said that one of the many examples of EU bureaucracy blocks development in that fish are landed for human consumption in Skagen. But the same fish landed to FF Skagen, even when fully documented as sustainable and traceable, is considered a waste product.

‘Why this difference?’ Johannes Palsson asks.

‘There are some important protein species, such as sandeel. We used to catch a million tonnes a year before it was restricted by quotas, not that many years ago. It is now incomprehensible that with no threat to the stock, we now catch less than half of that in a good year and in some years nothing at all.’

He said that the industry is taking the initiative to gather more knowledge and to gain new perspectives on fishing and production as a way to contribute to the analysis and research that the authorities in Denmark are not able to.

‘We challenge the political establishment, fisheries biology and the EU bureaucracy,’ he said. ‘We must get away from unsuitable biological models and the unjustified precautionary principle. We must ensure that quotas are 100% utilised and develop even more sustainable production,’ he said.

‘The focus on quality will be even more fierce. We must continue to work to analyse and understand the unknown ingredients in fish meal that are of such high health importance to young animals and humans. In 25 years, we expect that these products will be regarded as nature’s medicine. Fishmeal and fish oil will be used not only as supplements in animal feed, but also directly as an ingredient of food for human consumption.’

‘It is high time to assess the position of this profession and this industry in a much wider perspective for the future benefit of the community, both nationally and internationally.’