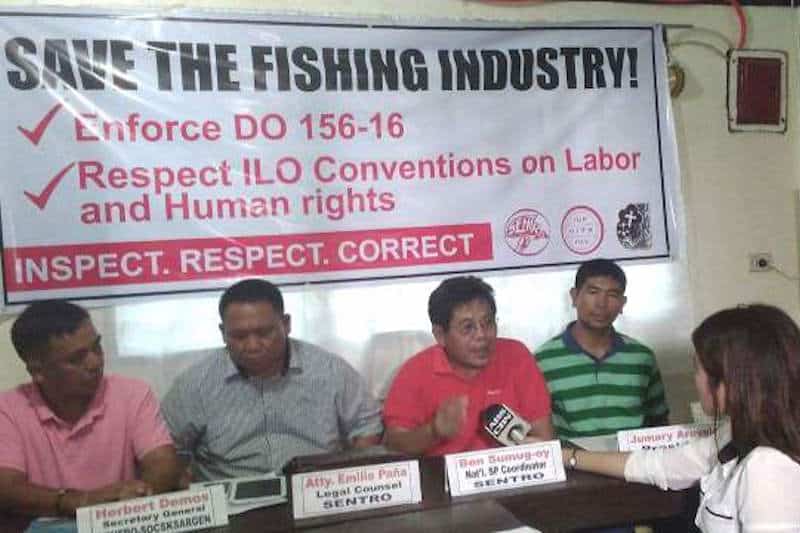 Representatives of the Citra Mina Workers Union and their national centre SENTRO have called on the seafood industry employers’ association SFFAII to take stock of the potential consequences of growing international concern over the industry’s ongoing failure to respect international standards.

At a press conference in General Santos City the unions urged SFFAII to drop its opposition to implementing the government Department of Labor and Employment’s Department Order No. 156-16. Formally adopted in June 2016, DO 156-16, this establishes minimum social standards on Philippines-registered commercial fishing vessels, has been “suspended” due to industry lobbying. The unions emphasised that the Order merely seeks to enforce existing elements of the Labour Code and obligations set out in international instruments to which the government is a signatory.

Holding up implementation of 156-16, and failure to resolve the long-running Citra Mina dispute, the unions warned, needlessly jeopardise the future of the industry.

Members of the SENTRO Citra Mina Workers Union in the Philippines joined an international trade union delegation for talks in Brussels last month with the European Union’s Directorate General for Trade. This focused on systematic abuses by Citra Mina and the need for firm EU action to ensure respect for international human rights standards throughout the Philippines’ massive tuna industry.

Under the EU’s GSP+ system, tuna exports from the Philippines receive tariff-free entry into the European market on condition that minimum rights standards are respected. The union delegation highlighted Citra Mina’s systematic anti-union practices, the current Philippines government’s suspension of an order by the previous government mandating measures to combat the worst forms of exploitation on fishing vessels and Citra Mina’s abandonment of crews arrested for illegal fishing in Indonesian waters.

The IUF delegation leafleted the annual Brussels Seafood Expo, the world’s largest commercial sea food fair where both Citra Mina and the government of Philippines were present.