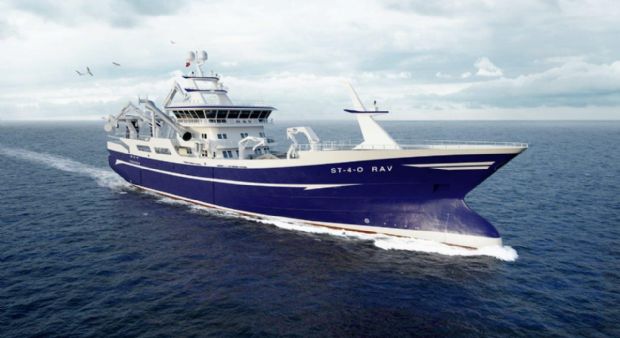 Karstensens Skibsværft has signed a contract to build a new 79.75 metre purser/trawler for Norwegian company Peter Hepsø Rederi, with the deal formally signed at Nor-Fishing.

The new build, scheduled to be delivered in October 2018, is being built at a cost of DKK215 million and will replace the company’s existing 65 metre Rav, which was built in 2003.

Peter Hepsø Rederi has a history going back to 1917 – the same year that the Karstensens shipyard was established, and both are now run by the third generation of their respective families. This is the ninth new vessel for the company, which is run by CEO Audhild Hepsø and her sisters Kristin Hepsø and Marit Hepsø. Their brother Petter Hepsø sails as mate on board Rav, as does Marit Hepsø’s husband, engineer Henning Sundet, and the fourth generation of the family is already at sea.

The present Rav operates as a trawler on blue whiting, and as a purse seiner on herring and mackerel, and the new vessel is expected to work on the same lines.

Its design has been developed by the yard with input from the owners, and Peter Hepsø Rederi has sought to make the vessel as safe as possible for the crew, seeking innovative ideas to improve safety and working conditions. Rav will be the first vessel in the Norwegian fleet with a fully watertight cargo deck, increasing the vessel’s freeboard by almost three metres.

The owners have also chosen to fit electric winches, and Rav will also have the first electrically-powered purse seine hauler.

The main engine will be a 5000kW unit with a two-step gearbox, plus a take-me-home option as part of a sophisticated diesel-electric arrangement. There will be 950kW bow and stern thrusters, twin 1525kW Johnson Controls RSW systems and a vacuum discharging system with four 66kW powerpacks and two 4200 litre vacuum tanks.