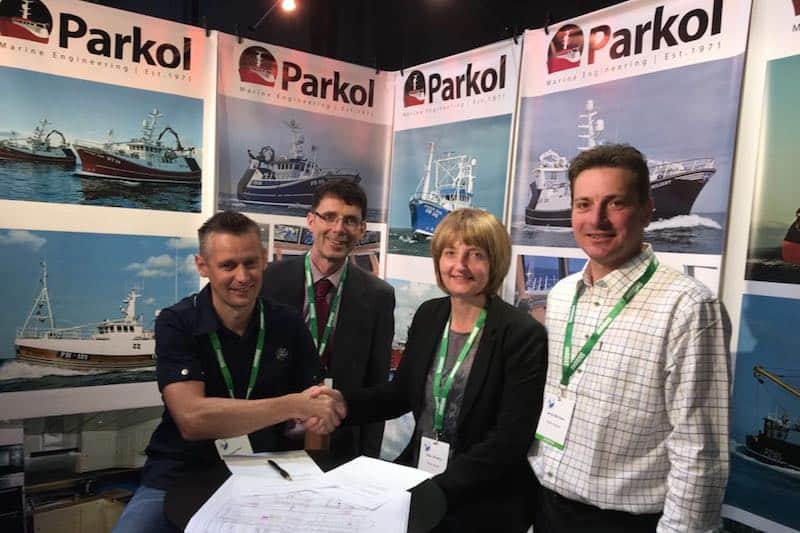 Parkol Marine Engineering signed order for two new fishing vessels at the Skipper International Exhibition in Aberdeen. The Whitby yard already has a healthy orderbook, but two orders were signed at the company’s stand at the exhibition today.

Andrew and Diane Watt of Holborne Fishing Company Ltd in Scrabster signed an order for a new 19 metre crabber to be built to an Ian Paton design. Holborne already operates the Sparkling Line, which was converted from a netter to operate as a crabber when it was acquired from Waterdance – where it had been replaced by the Karen of Ladram.

The new Holborne crabber will be fitted with a 483hp Mitsubishi S6A3 MPTAW main engine, driving a 1900mm diameter propeller via a Reintjes WAF274K gearbox with a 7:1 reduction. Its design capacity is for 32,000 litres and construction is scheduled to start in summer next year, with a completion date in the summer of 2020.

Also signed at the Skipper show was an order for a 22 metre twin-rig trawler designed primarily for prawn trawling for skipper Robert West of the Fruitful Bough.

‘The build starts next week and the delivery date is the end of July next year,’ the Parkol’s Sally Atkinson said.

The gensets come from Cummins, with a pair of 100kVa 6BT units, plus a 190kW QSL9 to power the hydraulics, with the 30tonne three-barrelled winch, twin 10 tonne net drums and the 10 tonne gilsons to be supplied by EK Marine.