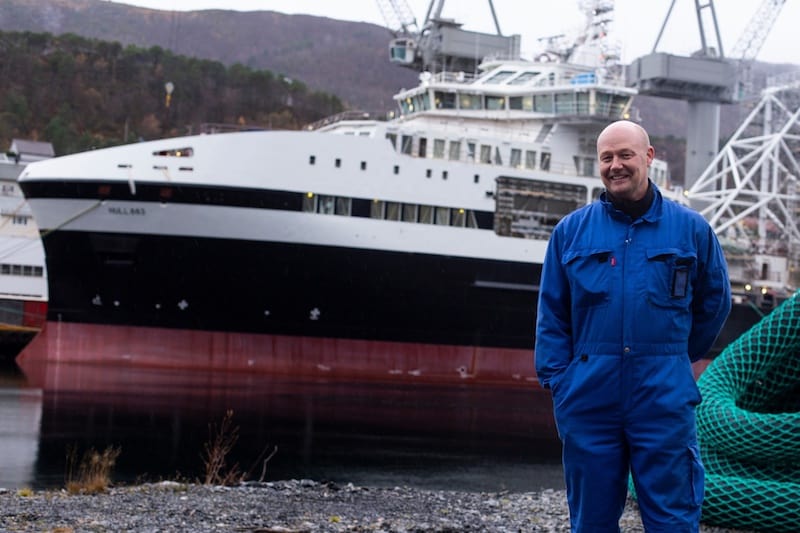 Ordered back in 2017, and scheduled to be ready ahead of 2019 harvesting season, Aker BioMarine’s flagship vessel is taking shape at the Vard shipyard, built at a cost of NoK 1 billion (€103 million), making the 130 metre vessel one of a kind.

Aker BioMarine tookthe step of opting for a specifically designed and equipped vessel to cope with the challenges of harvesting krill in the Southern Ocean, instead of refitting an existing fishing or supply vessel for the job.

This includes fitting the new vessel with a new active roll damping system from MRPC, designed to mitigate the effects of heavy seas, and making it possible for teams at work in the laboratories and on the factory deck to do their jobs, regardless of conditions.

VARD’s SeaQ Bridge is a key design feature which helps combat the often-difficult conditions. Originally designed for the demands of the offshore industry, this provides an efficient, secure, ergonomic working bridge environment.

The Eco-Harvesting system a ground-breaking technology when it launched, eliminating by-catches, and this has been further refined through a collaboration with VARD, Optimar and Aukra Maritime.

Antarctic Endurance has no shortage of processes and technologies that contribute to making the new ship as much as 30% more environmentally efficient than other trawlers.

It uses an energy management system developed with VARD, and the vessel optimises energy consumption in production, including heat recovery. The vessel’s boiler and engines are also optimised to reduce energy consumption, and the Promas propeller nozzle and two-stage reduction gear from Rolls Royce both improve the vessel’s efficiency.

In addition, the entire vessel is equipped with Luminel LED lights which reduce the amount of energy needed for lighting by 75%.

Built to accommodate 70 people who can expect to spend several months at a time on board, the crew’s work and leisure environment have not been taken for granted or designed as an afterthought.

Whether it’s below-decks workshops, better ambient lighting, computer management and automation in the process area, or tailor-made fitness and recreational facilities the crew’s wellbeing is a paramount part of the design. Kitted out with modern decor with large windows, Antarctic Endurance even comes equipped with a sauna.