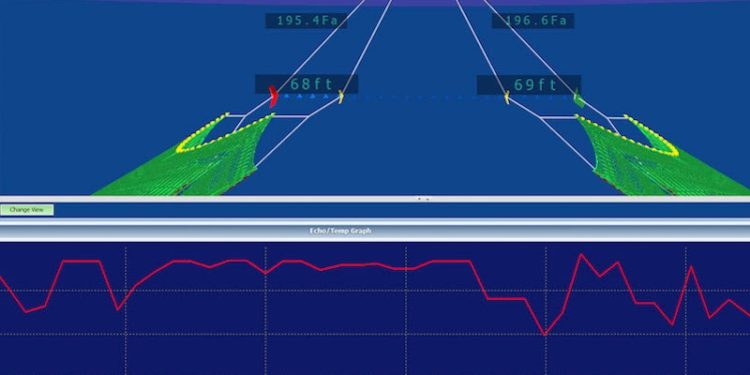 A real-time monitoring system launched by Notus is a first in giving shrimper skippers a way of knowing if their gear is on shrimp or not. The Notus Echo is designed to be mounted on a shrimp trawl’s separator grid and sends signals back to the wheelhouse indicating which part of a tow is most productive or if the shrimp catch rate has dropped off.

“It’s the main question for any shrimp trawler skipper: where am I catching shrimp on my tow?’ Francis Parrott at Notus said. ‘There is finally an answer with the Notus Echo. Conventional sounders cannot detect shrimp as, unlike fish, they have no swim bladder to reflect the sounder’s signal.’

The Notus echo works by detecting the sound of shrimp hitting the bars if the sorting grid. The data is transmitted back to the wheelhouse in real time, and Notus is delivering its Echo systems either as a standalone installation of with optional trawl sensors.

‘The Echo consists of a sensor and mic,’ Francis Parrott explained.

‘The mic listens for the sound of shrimp hitting the grate. Sound increases and decreases with the volume of shrimp that hits the bars. The sensor then transmits this information back to the vessel via a towed or hull-mounted hydrophone. This is linked to a command unit in the wheelhouse that displays information on a computer. Echo also monitors grid angle and temperature.’

He said that the results have been a real success in boosting shrimp catches as the skipper knows exactly which part of a three- or four-hour tow is producing shrimp, so the catching vessel can be spun around to hit the same spot a second time

‘It’s awesome! Worked right out of the box. I can see if I’m catching 250kg/hr or 1000kgs/hr, commented Jimmy Burns who skippers the Galway Bay.

‘Seeing where I am catching shrimp changed our fishing operation. We would not want to fish without it,’ added skipper Ben Downs of the Pacific Dove.

According to Notus, many trawlers have added door sensors alongside their Echo systems.

‘On a twin-rig trawler, this means monitoring the door spread of each trawl, trawl warp lengths and door angles. These geometry sensors enable the skipper to fine-tune their operation for optimal fishing,’ he said. ‘Basically, locate shrimp with the Echo and ensure maximum catch with optimal spread, trawl wire lengths and door angle.R03;’