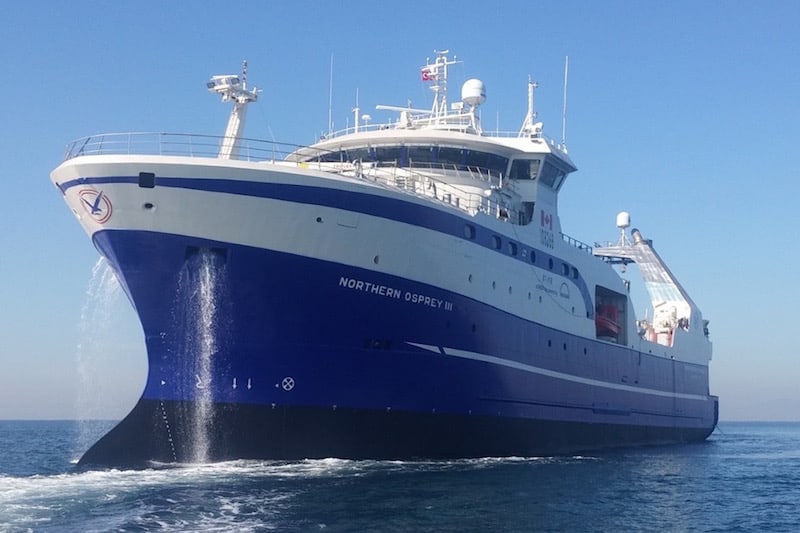 The third trawler built to a Skipstekisk design for Canadian company MV Osprey Ltd is due to be named at the Tersan shipyard tomorrow.

The order for Northern Osprey III was placed in November 2015 after a period of intense design work for the Ålesund naval architect to develop the 80.25m by 17m beam factory shrimp trawler.

Northern Osprey III is the third trawler for the company, established by expatriate Norwegian Ulf Snarby. The first was the 1992 Northern Osprey, which was followed in 1996 by Northern Eagle, which has since been sold.

The vessel is designed with a high ice-class for operation in challenging ice conditions outside Newfoundland and Labrador. It is arranged with accommodation for 38 persons completed to a high standard, including crew facilities such as a media/movie room, gymnasium and a sauna.

Northern Osprey III is outfitted with a processing and freezing plant with a capacity of 125 tonnes per day. Processing is arranged for grading, cooking and packing of different sizes of shrimps as well as for processing of head and gutted white fish.

The new trawler is arranged for palletised cargo in two separate cargo holds with individual freezing.

It represent the very latest development and technology available within energy conservation and pollution reduction, within the DNV-GL’s Clean Ship Designation.

Northern Osprey III is powered with a Tier III MAN main engine of 6000 kW coupled to a gearbox with PTO/PTI capacity of 3200 kW.