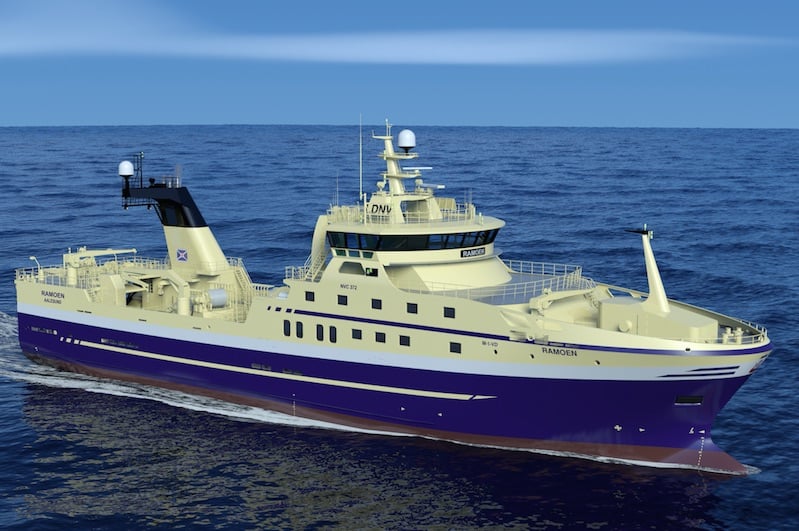 The latest in the line of Rolls-Royce fishing vessel designs is due to be delivered this summer by the Astilleros Armon yard at Gijon in Spain. As with most large vessel newbuilds today, this trawler is designed to leave nothing for the birds, with everything that comes out of the codend utilised on board.

While the new Ramoen is packed with innovation, its owners have also opted for tried-and-tested technology in some areas, such as choosing a low-pressure hydraulic winch system made by Rolls-Royce’s Brattvaag factory rather than the latest permanent magnet winches now in use on board Holmøy.

The new trawler replaces a 66 metre, 50 tonne per day factory trawler that was built at Brattvaag in 1997, and the new Ramoen is slightly longer at 75 metres, but is in technology terms far ahead of the older trawler that has already been sold to South African operator I&J. Owned by Vartdal Seafood, which has had its own sales arm selling mainly shatterpack fillets to the UK market since 1987, the ownership is split between brothers Knut and Atle Vartdal and pelagic operator Eros AS, the Fosnavåg-based owners of pelagic vessels Eros, Herøy and Herøyfjord.

Per Magne Eggesbø of parent company Eros said that things have changed in the last few years, notably with a shift towards H&G production at sea and with the frozen fish shipped to China for processing. Many of the newer factory vessels are designed for producing solely H&G fish, while there are only a handful of filleters in operation in the Norwegian fleet.

‘We feel that filleting at sea is more interesting, and it gives us opportunities to develop the products that our customers need. At the same time, costs in China are rising, which makes the H&G option less attractive,’ he said.

Ramoen is being fitted with the first Valka X-ray bone removal system with a high-pressure waterjet cutter to be supplied to a seagoing factory, and he said that as this is the first of its kind, the Valka system had to be strengthened to cope with the constant movement and the conditions at sea.

The factory deck incorporates a stunner to incapacitate fish before they are bled and processed, and the deck promises to be among the most sophisticated of its kind anywhere, making the most of the approximately 7000 tonne quotas for cod, haddock, saithe, redfish and Greenland halibut Ramoen has at its disposal.

‘There are rotating bleeding tanks that ensure a constant bleeding time as with conventional washers the last fish in can be the first one out and it’s important to ensure the correct washing time,’ Per Magne Eggesbø said.

‘We’re looking for better yields and top quality that give us premium prices, as well as tighter grading as that’s what our customers want and it brings better prices. We also have opportunities to produce meal and oil at sea from the factory waste, with the meal plant powered by excess heat routed from the exhaust.’